Ramsey hamstring injury 'not a big one' 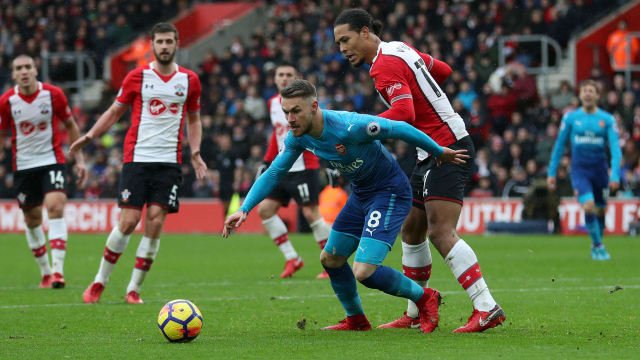 Aaron Ramsey will miss Arsenal's midweek trip to West Ham due to a hamstring injury, although Arsene Wenger insists the Wales international's problem is not serious.

Ramsey has put recent fitness woes behind him to feature in all but one of Arsenal's Premier League games this season, scoring three times and supplying six assists.

The 26-year-old completed 90 minutes as Olivier Giroud came off the bench to head a late equaliser at Southampton but did not come through the game unscathed.

Ramsey joins an injury list that also features Shkodran Mustafi, although the Germany centre-back is pushing for a return in Saturday's match against Newcastle United.

"Mustafi will not be back and we lost Ramsey against Southampton. He will not be available for [the West Ham] game," Wenger told a pre-match news conference.

"Everybody else, apart from the long-term injuries, looks available. We will have tests to see how they have recovered.

"Mustafi is out in training, running, but the medical staff have decided he is not ready. He might be ready for Newcastle on Saturday."

Asked for further detail on Ramsey's setback, Wenger added: "It's a hamstring [injury], normally a short period. Not a big one."

The boss is here - and he's been discussing @MustafiOfficial

Arsenal lie fifth in the Premier League, a point behind fourth-placed Liverpool having taken one point from their past two matches.