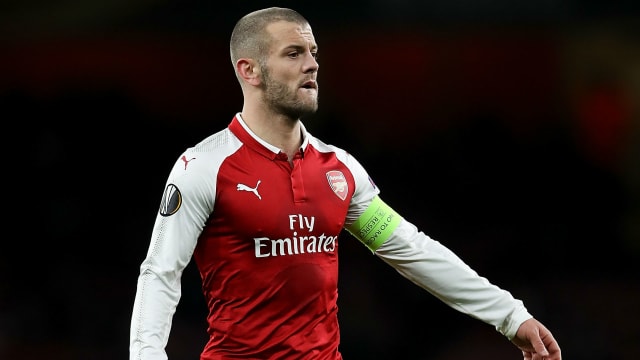 Jack Wilshere expressed relief at scoring his first goal for Arsenal in two-and-a-half years in the Gunners' 6-0 Europa League win over BATE.

The 25-year-old enhanced his first-team credentials with an influential performance in midfield, scoring Arsenal's third goal and providing the assist for Mohamed Elneny to wrap up an emphatic win with their sixth.

The result did not affect Arsenal's position as winners of Europa League Group H, but it condemned BATE to fourth place and an exit from the competition.

When asked whether his goal came as a relief, Wilshere told BT Sport: "Yeah a little bit.

"It was important we enjoyed it. It's one of those games that if you don't give it the right amount of focus you don't enjoy it.

"We've had a good group stage this year. We're happy going into the next round and hopefully we can get some more goals and be happy playing together."

Whose first-half goal did you enjoy the most?#AFCvBATEpic.twitter.com/0OQgNUWQ2H

Wilshere made his fifth Europa League start of the season against BATE, but he has yet to make a Premier League start for Arsenal in 2017-18.

When asked whether his performance might enhance his chances of breaking into Arsene Wenger's first team, he said: "All we can do is show what we can do when we get an opportunity.

"If we are called upon from the bench we have to be ready and support the boys who are playing. At the end of the day, we are all Arsenal."

Theo Walcott, who scored Arsenal's second goal and teed Wilshere up for the third, said: "The boss told us to go out and enjoy yourselves as we had already qualified.

"We played with a lot of freedom, attacked very well, and defensively we were very solid. There were so many smiles out there. We've got to be very pleased with our evening.

"There's plenty of competition when you play for Arsenal. It's a great headache for the manager to have. All we can do is be ready when called upon. We were very professional, everyone did their jobs."