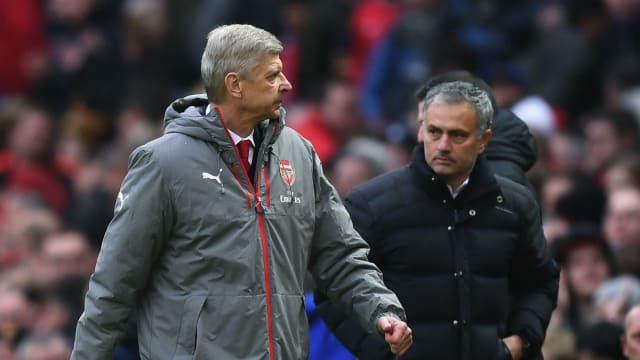 Arsene Wenger has responded Jose Mourinho's jibe that he was dishonest over Alexandre Lacazette's fitness before Arsenal's game against Manchester United last weekend.

France striker Lacazette was ruled out of Saturday's game by Wenger on account of a groin injury, only to recover, start and get on the scoresheet.

That effort was ultimately in vain as the Gunners went down 3-1 in a thriller but the former Lyon star's presence lingered with Mourinho as he accused Manchester City boss of being similarly underhand by claiming playmaker David Silva is a doubt for Sunday's Manchester derby.

"The truth is Eric Bailly, no chance for the weekend, Phil Jones a chance, [Marouane] Fellaini a chance, Zlatan [Ibrahimovic] a big chance and [Nemanja] Matic is injured but will play for sure. [Michael] Carrick no chance," Mourinho told a news conference when assessing his walking wounded after the 2-1 Champions League win over CSKA Moscow on Tuesday.

"I'm telling the truth, he's injured but will play for sure. No stories of Lacazette or David Silva. All the truth."

When these comments were put to Wenger at his briefing to preview Arsenal's match with BATE in the Europa League, he was relaxed in standing by his initial version of events.

"I though he wouldn't play, yes, but in the end he could play. What did you want me to do, to leave him at home?" he replied.

"I'm always honest and I thought really he wouldn't play. He had a test on Friday morning and we were not sure he would play.

"After he tried and he played. That's part of football."

Defender Shkodran Mustafi could be in a similar boat for Sunday's Premier League trip to Southampton.

"We have just a small problem with Mustafi form Saturday but everybody else looks alright," added Wenger.

"He had a little thigh problem. It's a small one. It's a possibility [he will be fit for] Southampton, if not [it will be] West Ham next week."

Wenger must hope Saints boss Mauricio Pellegrino is a touch more understanding than Mourinho, should the Germany international emerge at St Mary's.