Injured Insigne out of Feyenoord clash 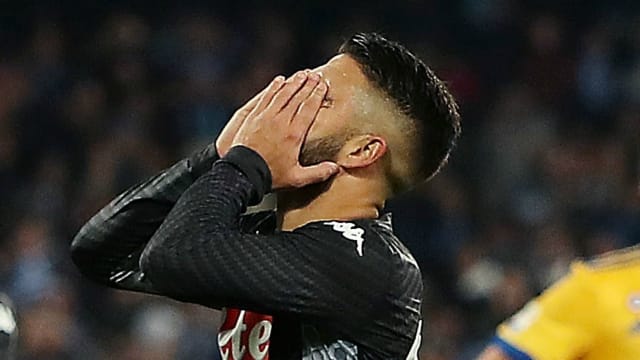 Lorenzo Insigne is out of Napoli's Champions League match against Feyenoord on Wednesday, with the Serie A side needing to win to have any chance of qualification.

Maurizio Sarri's side must win at Feyenoord and hope Shakhtar Donetsk lose to Group F winners Manchester City on the final matchday of the group stage.

But Napoli will be without Insigne for the game at De Kuip, the Italy international having been ruled out with an injury sustained in Friday's 1-0 league defeat at home to Serie A champions Juventus.

Insigne has started each of Napoli's 22 matches in Serie A and the Champions League so far this season, contributing four goals in each competition.

.@GhoulamFaouzi has penned a new deal with #Napoli until 30 June 2022! #ForzaNapoliSemprepic.twitter.com/37mxdeafq9

Napoli left-back Faouzi Ghoulam is also out of the Feyenoord match with a cruciate ligament injury sustained in his team's Champions League defeat against City last month.

But Napoli announced on Tuesday the Algeria international, reportedly a target for Pep Guardiola, has signed a new contract running to 2022.

"Proud and happy to be part of this great project," Ghoulam posted on Twitter. "To represent this beautiful city and its colours. Proud to be Neapolitan. #ForzaNapolisempre."