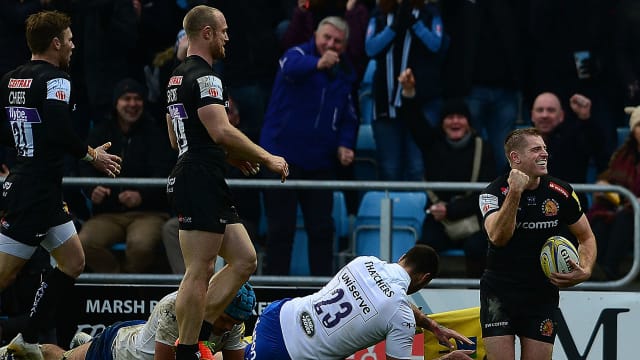 Rampant leaders Exeter Chiefs extended their winning run to nine matches with a 42-29 defeat of Bath and Kearnan Myall's try right at the end snatched a dramatic 32-25 victory for Wasps over Leicester Tigers.

Exeter edged a top-of-the-table clash with Saracens last weekend and the champions maintained their outstanding form by running in six tries to see off Todd Blackadder's men at Sandy Park and go eight points clear.

The Chiefs blew Bath away in the first half, Luke Cowan-Dickie, James Short, Mitch Lees and Don Armand going over to give them a 28-3 lead at the break.

Barnstorming number eight Thomas Waldrom added a fifth try as Exeter ran riot and Gareth Steenson added another, the fly-half converting his own score to take his tally for the afternoon to 17 points.

Bath were soundly beaten in the absence of Taulupe Faletau and Sam Underhill, but showed character to salvage a losing bonus point, England duo Jonathan Joseph and Anthony Watson crossing before Aled Brew and Matt Banahan touched down in the closing stages.

Some of the best @ppauk images of today's win against @bathrugbypic.twitter.com/ObFIrfg6SJ

Wasps have now won four Premiership games in a row but there was a sense of deja vu for the Tigers as they were beaten right at the death at the Ricoh Arena once again, the hosts moving above them and into fifth spot.

Josh Bassett scored a last-minute try to give Dai Young's side a semi-final win over Leicester last season and this time it was Myall who burst his way over for the decisive try.

A quickfire second-half double from Tigers wing Jonah Holmes, replacing the injured Jonny May, on his Premiership debut against his former club put the visitors in front and George Ford's penalty made it 25-25 after an Elliot Daly try but Myall had the final say.

In-form Gloucester are up to second after hammering bottom side London Irish 39-15, Billy Burns claiming a double as the Exiles endured another miserable outing and were a man down for the second half following David Paice's red card for a tackle on Willi Heinz off the ball.