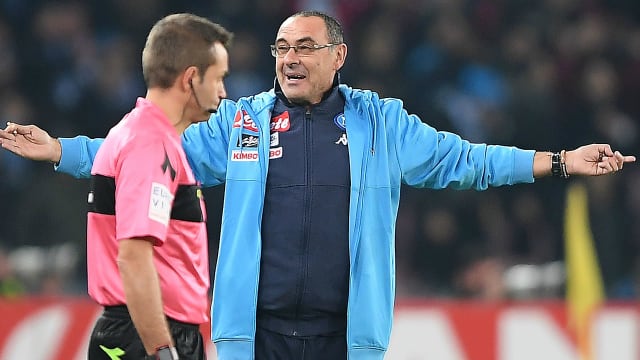 Maurizio Sarri said Napoli "dominated Juventus in every conceivable way" despite suffering a 1-0 loss to the reigning Serie A champions.

Gonzalo Higuain came back to haunt former club Napoli on Friday, his 12th-minute goal helping Juve move within a point of Sarri's leaders.

It was Napoli's first Serie A defeat of the season and first at home in the league since February.

Napoli head coach Sarri could not fault his players as he lamented fatigue following the blockbuster showdown.

"We dominated Juventus in every conceivable way and didn't allow them much, but at this moment we aren't as sharp up front and are not transforming this dominance into goals," Sarri said during his post-match news conference.

"I complimented the team and if we lose one Serie A game after nine months, that's not a disaster. With a bit of sharpness, we would've won. I don't want to see any heads drop.

"Conceding a goal so early made it easier for Juventus to sit back and go on the counter. They are strong physically and know how to soak up pressure.

"We know that we've got three world-class strikers and will get them back to their best soon. For the moment, we've just got to grit our teeth and push on. We are still playing excellent football."

Napoli star Lorenzo Insigne was withdrawn in the 76th minute at Stadio San Paolo, succumbing to a groin problem.

Insigne also hobbled off in the 4-2 Champions League loss to Manchester City last month and Sarri provided an update on the Italy international, while insisting he cannot afford to rest Dries Mertens with his options limited.

"Insigne has a groin inflammation since he returned from international duty," Sarri said. "I thought of taking him off earlier in the game, but he was still useful. Now we need to evaluate his condition, as I have no idea if he can play against Feyenoord.

"As for Mertens, I wouldn't know who to rotate him with. There are no other options in the squad. People talk about Adam Ounas as if he's Cristiano Ronaldo, but he's a kid of 20 and a talented player who at this moment just needs to focus on maturing. I hope he can do well in future."