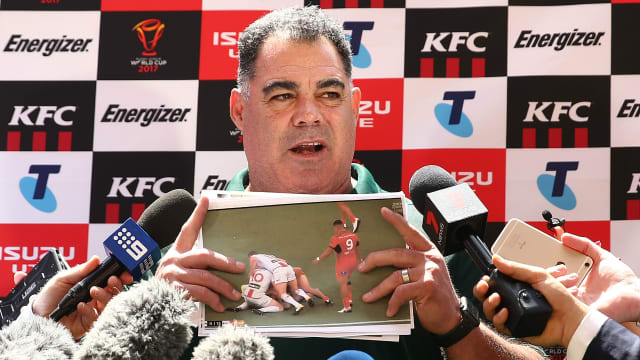 Kangaroos head coach Mal Meninga returned serve on the eve of the Rugby League World Cup final against England after Wayne Bennett's accusations that Australia are using illegal tactics to slow down the ruck.

Reigning champions Australia and England will go head-to-head in Saturday's decider at Suncorp Stadium in Brisbane, and Bennett stoked the fire by claiming the Kangaroos have been using cheating ruck rules - a delay tactic.

Meninga hit back at the England boss on Friday, printing photographs for the media, which showed Bennett's side employing similar tactics throughout the tournament, against Tonga in the semi-final and during training.

Asked about Bennett's claims, Meninga told reporters: "It's to be expected. That's part of the banter of such a big game.

"I might show you some pictures. That's England and Tonga last week and that's their training on Wednesday morning. They are practising three in their tackles.

"That's the game of rugby league. It happens every week in the NRL."

Pressed on the pre-match talk, Meninga said: "It's common. It's what happens. There is banter and nice pictures in the paper.

"It's part of the theatre of big games. They want to win. We want to win. It adds to the drama of a World Cup final.

"You've got to slow the ruck down. That's the game of rugby league. If you win the ruck you have a great chance of being successful.

"We don't want to make it about me and Wayne. It's about the two teams.

"Wayne feels that the ruck has been refereed unfairly but I've showed some examples that it happens in every game.

"Banter is great. Theatre is good. Wayne feels like he needs to add to it all and I'm happy to return serve. It's all fun."