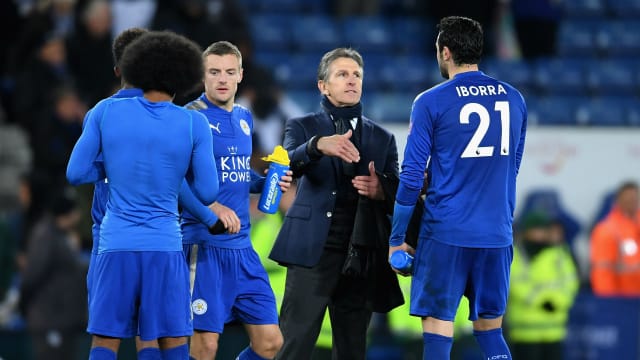 Claude Puel was impressed as much by Leicester City's defensive solidity as their work in attack during Tuesday's 2-1 win over Tottenham.

Jamie Vardy and Riyad Mahrez set the bar high with stunning efforts in the first half of the contest at the King Power Stadium.

But Leicester's defence also had to play their part as Harry Kane scored during a late barrage from Spurs, which included Christian Eriksen and Fernando Llorente missing great chances and Danny Rose seeing an injury-time penalty claim turned away.

It was the first time Leicester have beaten Tottenham at the King Power in the Premier League, and Puel was keen to credit the collective effort.

"I think of course it is always difficult to finish this game because there was a lot of pressure for my team but it was a fantastic game for us," he told BBC Sport.

"It was important for me to see my players playing with this quality. The first 30 minutes were very amazing but after that it was important to keep the result with solidity and desire and in the end it was fantastic work by the team to get this result."

CP: "It was really promising to see my players play with such quality in the first half. After that it was important to hold the result with resilience and desire." #LeiTot

Leicester's win sees them move into the top half of the table, but Puel says it is the Foxes' points tally not position in the league that is important.

"Next we play Burnley, it is a difficult game and it will be important to give a good response," he added.

"It [being in the top half] is not crucial for the moment, it is important to take the points.

"We were a bit frustrated about our game with Stoke and West Ham [which both finished in draws] because we had opportunities to score more.

"This is better because it is good for the confidence of the players for the future."