Neither side deserved to win - Hughton 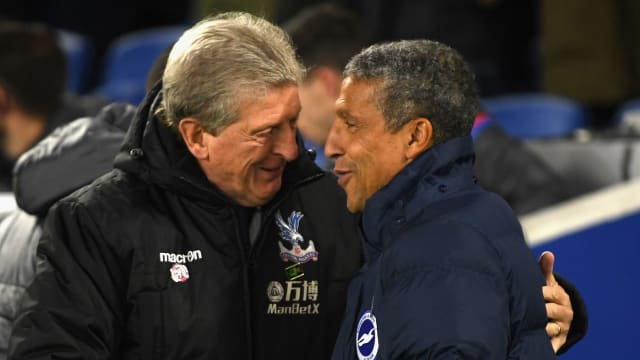 Albion had chances to win the game and former Palace striker Glenn Murray had a header cleared off the line by Andros Townsend as the visitors clung on for a point in the last few minutes.

Hughton described the scoreline as "a fair result" but it leaves his side going into Saturday's clash against Liverpool on the back of three games without a win.

"We have to ask did we play well enough to win the game? Probably not," Hughton told BBC Sport. "But neither did they. So it's a fair result.

"We had some good opportunities but the longer it went on, the way it went it was going to be a stalemate, and you felt maybe it would be a set-piece or a mistake that would settle it.

"It was a nervous game and didn't have the flow. Maybe not the style that you would expect a derby to have.

"Palace have a lot of ability in the final third, so if you do not play well enough you have to make sure you don't lose it."

Despite seeing his side keep their first clean sheet, Palace manager Roy Hodgson felt his front three of Christian Benteke, Wilfried Zaha and Andros Townsend could have given him more.

Benteke and Zaha forced Brighton goalkeeper Mat Ryan into a good double save after 14 minutes but seldom threatened thereafter.

Hodgson told reporters: "I was satisfied with a point and it was probably a fair result. This was a derby game and one we could not lose.

"I thought we defended well. Given our attacking options I felt we could've done more, but didn't capitalise on the moments we had.

"Both teams were very determined, but the game was played in a fair way. It was competitive, but there were no nasty challenges."

The result earned Palace their first point from an away game in the Premier League this season.

They go into Saturday's trip to West Bromwich Albion with six points from their last five Premier League games, but Hodgson felt it could have been more.

"I expected Brighton to be a very solid team, a team very difficult to beat," he said. "We had to make certain we didn't go away empty handed, but I'm a little disappointed we didn't capitalise on those moments we had."