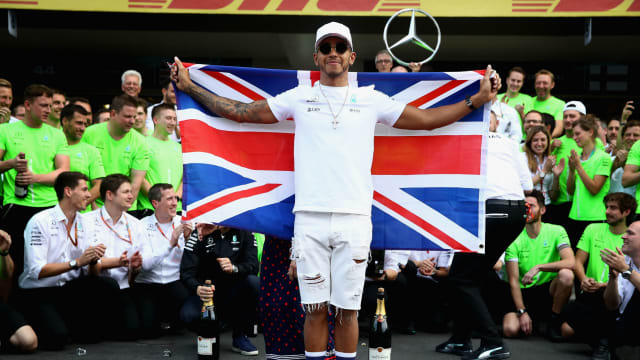 Plenty changed in Formula One in 2017, but a lot stayed the same too, with Lewis Hamilton and Mercedes each securing championship number four.

The Silver Arrows' quartet have come in sequence - one that was threatened by an overhaul in technical regulations that were expected to bring the likes of Ferrari and Red Bull into the mix.

Indeed, they did. But it was not enough, with Hamilton just outpointing Sebastian Vettel when it mattered most to regain the crown he lost in 2016.

With the dust settling on the 2017 season, Omnisport writer Matt Scott rates the teams, and top six drivers, in the paddock this season.

Mercedes (668 points) - No champion team has ever rode out a set of regulation changes like the Silver Arrows have. The sum of non-Mercedes victories jumped from two last year to eight this, but their greater experience of recent success was too much for Ferrari.

Lewis Hamilton (363 points, 1st) - Not just Britain's premier racer, Hamilton has cemented himself as an all-time great this year. His first error of the season came in qualifying for the Brazilian Grand Prix - when the title had already been secured - but Hamilton has admitted the celebrations have led to him feeling dazed in the closing events of the season, a reminiscent scenario to 2015, when momentum slipped so much to propel Nico Rosberg to the title the following year.

4 years in a row!! I'm so proud of our Team's achievement today!#4TheTeam#Champions#StillWeRise#USGP@MercedesAMGF1pic.twitter.com/AuYpHqs7GL

Valtteri Bottas (305 points, 3rd) - The deep trough in the middle of Bottas' season threatened to overshadow his early peaks, but a late-season resurgence leaves him looking like an able deputy to Hamilton again. Improvement will be needed in 2018 to keep his seat, though.

Ferrari (522 points) - The Scuderia could have a strong argument for having the best car on the grid in 2017. Before the meltdown in Singapore, Vettel was pegged by many as favourite for the drivers' title. Reliability will be the keyword at Maranello in 2018.

Sebastian Vettel (317 points, 2nd) - Vettel's re-emergence in the title fight may not be as romantic as Ferrari's, but his battle with Hamilton will be more fondly remembered than the Brit's with Rosberg beforehand. Must surely regret his overly cautious start in Singapore, which wrecked his season, despite remaining steely in his assertions that he did not make an error.

Kimi Raikkonen (205 points, 4th) - Last season, or maybe even the one before that, feels like it would have been the best time for Raikkonen to bow out at the top. Reliability alone leaves him above the Red Bulls, who won races with far inferior machinery as the veteran Finn all too often found himself battling with the pluckier Force India drivers. Robbed of a victory in Monaco, but it says a lot that Ferrari were willing to sacrifice him as early as the sixth race of the year.

Red Bull (368 points) - Once again, Red Bull won the development race over the season, coming from a very lonely third-best to bring the fight to Ferrari and Mercedes by the end of the year. Max Verstappen's win in Malaysia differed to most of Daniel Ricciardo's in that he was the best driver on the grid - no crashes, no flukes...

Daniel Ricciardo (200 points, 5th) - Despite Verstappen's impressive performance in Malaysia and another win in Mexico, Ricciardo still beat his team-mate. The 'shoey' was seen in five successive races from Barcelona to Austria, and the amiable Aussie took to the podium four more times - a personal best of nine. His luck ran out later in the season, though, with three retirements in the last four events.

'They say Brazil is a tough place to overtake'@danielricciardo: I've got this... twice #F1#BrazilGP ?? pic.twitter.com/CsGQHXXcWG

Max Verstappen (168 points, 6th) - Horrendous luck with his car wrecked the first half of Verstappen's campaign, but two brilliant wins and a recovery drive for the ages in Austin ensured the Dutchman has plenty of highlights beside his name. Curse the stewards who took third place off him in the USA.

Force India (187 points) - Both Sergio Perez (100) and Esteban Ocon (87) accrued enough points to finish fourth in the constructors' standings individually, such has been the strength of the pink cars this year. Quarrels between them have done nothing to stop Force India's progress, but fresh fights from Renault and McLaren could test them again in 2018.

Williams (83 points) - Felipe Massa was a consistent points-scorer in his final F1 season, but he was not quite the leader Williams needed after losing Bottas. Whether Robert Kubica, Paul Di Resta or someone else partner Lance Stroll in 2018, the whole team look likely to be something of an unknown quantity.

Renault (57 points) - Making the move for Carlos Sainz Jr before the season was done was good business for the French team, after Jolyon Palmer's woeful, and almost pointless, year. The Spaniard and Nico Hulkenberg shape as a tasty line-up for 2018. If Renault power can match Mercedes, fourth in the championship is on.

Toro Rosso (53 points) - The sister Red Bull team have been a bit all over the place in 2017, with only Sainz acting as any semblance of stability. The inexperienced Brendon Hartley and Pierre Gasly, and Honda power doesn't look like much of a recipe for future success.

Haas (47 points) - Haas have made good progress again, with Kevin Magnussen and Romain Grosjean almost doubling the team's 2016 points haul. Grosjean beat his team-mate, but struck an increasingly frustrated figure as the campaign went on and may be regretting his decision to leave a Renault team that has designs on breaking into the title picture.

McLaren (30 points) - The race to get out of their Honda deal was the most important for McLaren in 2017. Switching to Renault power units does not guarantee success, but it should at least put Fernando Alonso and Stoffel Vandoorne closer to the cars they ought to be competing with. The Spaniard's formula-hopping is set to continue next year, too. Can McLaren keep him interested in F1?

Sauber (5 points) - A pair of fine Pascal Wehrlein drives in Barcelona and Baku won Sauber's only points, but the Mercedes junior is unlikely to return, unless he can muscle his way in at Williams. Sauber will be one to watch in 2018, with Ferrari protegee Charles Leclerc likely to get a seat after tearing through F2 this year.