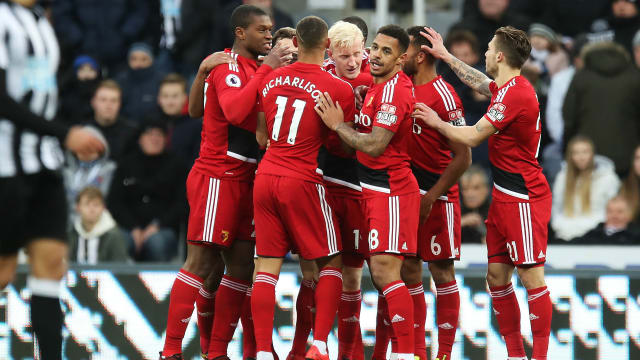 Newcastle United slumped to a fourth successive Premier League defeat as Watford stormed to a 3-0 win at St James' Park on Saturday.

Eager to correct a concerning wobble, the alarm bells only grew louder for the Magpies as they were routinely exposed at the back.

Watford had themselves ended a three-match losing run last weekend and looked full of confidence during an open first half.

Will Hughes clinically dispatched his second in as many matches in the 19th minute before Marvin Zeegelaar, who assisted the opener, drew an own goal from DeAndre Yedlin in first-half stoppage time.

The rout was complete just after the hour mark when Richarlison teed up Andre Gray to put the seal on a second consecutive victory and strengthen Watford's grip on eighth.

Joselu did manage to force a rare save from Heurelho Gomes inside the final 25 minutes, but Newcastle never looked like mounting the kind of comeback needed to avoid a seventh defeat in the league.

While Rafael Benitez's men slide closer to danger, Marco Silva's side already boast more away points, with 13, than the 12 they managed for the entirety of last season.

2 - Will Hughes has scored in back-to-back league games for the first time in his career. Bloom.

Matt Ritchie made a better connection with his side's next effort, although Richarlison was first to test either goalkeeper when he capped a counter-attack by drawing a sharp low save from Rob Elliot.

However, there was little the Newcastle goalkeeper could do about the next attempt. Hughes arrived late into the area and guided a fine finish into the bottom corner after being spotted by Dutch full-back Zeegelaar.

The hosts failed to heed the lesson and were thankful to see Abdoulaye Doucoure inexplicably volley wide from another left-sided Zeegelaar cross.

Watford sensed a weakness and profited once more on the stroke of half-time as Zeegelaar's low delivery deflected off Yedlin and beat a wrong-footed Elliot at his near post.

7 - No player has been involved in more away goals in the Premier League this season than Richarlison (4 goals, 3 assists). Talent.

The home side should have been buried within 10 minutes of the restart, but Gray and Richarlison both offered reprieves.

The pair made up for their errors in the 62nd minute. Richarlison had time to size up a cross, again from the left, and superbly picked out Gray for a simple stretching finish.

Spanish striker Joselu did draw a fine close-range save from Gomes with just over 20 minutes remaining, while substitute Aleksandar Mitrovic had a shot blocked by Christian Kabasele, but those proved the best of Newcastle's chances to improve a limp display at both ends.