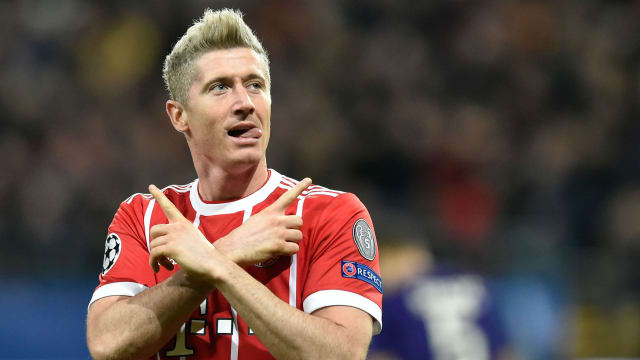 Goals from Robert Lewandowski and Corentin Tolisso were enough to give a below-par Bayern Munich a 2-1 win over Anderlecht in the Champions League on Wednesday.

The hosts had the better of the chances at the Constant Vanden Stockstadion, but their first goal in the competition this season would ultimately count for little.

Sofiane Hanni cancelled out Lewandowski's well-worked opener, but Anderlecht could not keep the pressure on and Tolisso turned from provider to scorer as he netted a 77th-minute winner.

Bayern lost Thiago Alcantara and Arjen Robben to injury, with Arturo Vidal grimacing as he was withdrawn late on, but Jupp Heynckes' men retain a slim hope of topping Group B on the final matchday.

The Bundesliga champions must beat Unai Emery's goal-crazy side, who thrashed Celtic 7-1 elsewhere in the group, by more than three goals if they are to usurp the French superstars.

Anderlecht, meanwhile, are still without a point in this year's tournament and will take on Celtic in Glasgow needing a big win to secure third place and a Europa League spot.

4 - For the 1st time Sven #Ulreich (@FCBayernEN) saved 4 shots in the first half in the @ChampionsLeague. Support.@FCBayernUS#RSCFCB

The hosts left top scorer Henry Onyekuru on the bench but had the better of the first half and will have been frustrated not to have been ahead at the interval against a disjointed Bayern.

Bayern goalkeeper Sven Ulreich was forced into action after just eight minutes, blocking Lukasz Teodorczyk's shot and then saving comfortably from Hanni on the follow-up.

Dennis Appiah then tested Ulreich at his near post with a well-struck effort before Anderlecht's best chance of the first half arrived in the 30th minute. Teodorczyk was found completely unmarked and with only the goalkeeper to beat but could only scuff his shot wide.

Teodorczyk had another opportunity at the end of the half, after more poor defending, but again he could not beat Ulreich before Bayern survived a late penalty shout after Pieter Gerkens went down under pressure from Niklas Sule.

Heynckes sent on James Rodriguez after Thiago was hurt in a seemingly innocuous challenge and the coach was also forced into another change as Robben had to be replaced by Javi Martinez shortly after the break.

The visitors suddenly looked a different side, though, and went ahead on 51 minutes, James finding Tolisso who squared for Lewandowski to tap home.

Yet Anderlecht continued to press and levelled just after the hour mark, Teodorczyk heading on for Hanni to slot home from close range, Anderlecht's first Champions League goal this season.

Bayern had a good chance to restore their lead, Matz Sels blocking Lewandowski but Teodorczyk also curled one just wide in an evenly contested second half.

The hosts also sent on Onyekuru as they searched for the second goal but it was Bayern who had the extra quality in attack when it mattered.

With a little over 10 minutes to go, Joshua Kimmich raced down the right and crossed for Tolisso who headed past a helpless Sels to make it 2-1 and hand Bayern all three points.