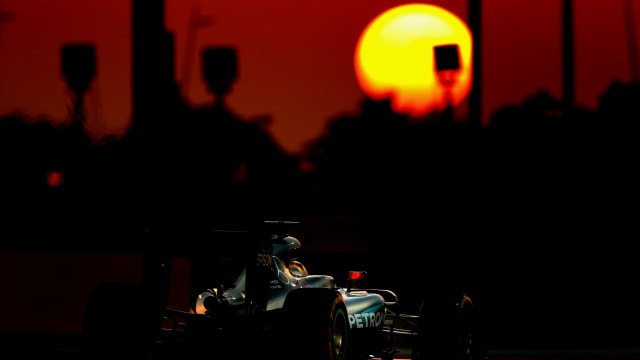 Abu Dhabi brings down the curtain on the 2017 season this weekend and Valtteri Bottas could wrap up a Mercedes one-two by pipping Sebastian Vettel to second place in the drivers' championship.

Mercedes have already claimed the constructors' crown and Lewis Hamilton won his fourth drivers' title in Mexico two races ago, were Bottas to finish above Vettel it would complete a dominant campaign for the Silver Arrows.

The battle for second is the main focus in Abu Dhabi this weekend, with the majority already turning their attention to 2018.

Toro Rosso were the latest team to name their driver line-up for next season, Pierre Gasly and Brendon Hartley given the nod ahead of Daniil Kvyat - who faces an uncertain future.

With that and more, we take a look at the talk emerging from the Formula One paddock ahead of the final race of the season.

World champion Lewis Hamilton is undoubtedly the star man in the paddock at the moment and Toto Wolff is desperate to keep him with Mercedes.

Hamilton's current deal expires at the end of next season and the Briton has hinted an extension could be agreed after this weekend in Abu Dhabi.

Unsurprisingly that is something Wolff is keen to push on with.

Wolff on Hamilton and new deal: "He's the greatest driver I've ever worked with," said the German.

"We really want him to stay with us, of course."

Fernando Alonso's desire to win motorsport's 'triple crown' has already seen him race the Indy500 and he will take part in the Daytona 24 hours next year.

Having won the Monaco Grand Prix, the Spaniard now has to triumph in Indianapolis and the endurance challenge in Le Mans to lift the triple crown.

And he began his quest for the latter on Sunday, completing 113 laps in Toyota's LMP1 car during a recent test in Bahrain.

"Fernando is one of the best race drivers out there," said Toyota adviser Alex Wurz. "So, as you would expect, he adapted quickly to a rather unique driving style."

Daniil Kvyat could face a season on the sidelines after Toro Rosso opted to go with Pierre Gasly and Brendon Hartley in 2018.

Kvyat was replaced in Malaysia by Gasly, while Hartley stepped up after Carlos Sainz Jr's move to Renault was brought forward.

And the current holders of seats with Red Bull's sister team will stay in place for next year, leaving Kvyat scrambling for a seat - potentially with Williams.

Scuderia Toro Rosso is very pleased to announce that its driver line-up for the 2018 Formula 1 season will be the one formed by Pierre Gasly and Brendon Hartley. pic.twitter.com/ohPpgWTPhH

ROSBERG BACK BEHIND THE WHEEL

Hamilton's former team-mate Nico Rosberg was back behind the wheel recently, but the German is not making an F1 return.

Instead, Rosberg was the guest of Lamborghini, driving their Centenario and a classic Miura around their track in northern Italy.

Michael Schumacher's F1 legacy is well known, and such is the pull of the seven-time champion that his 2001 Monaco Grand Prix-winning Ferrari set records last week.

The Ferrari F2001, chassis number 211, went under the hammer at the Sotheby's Contemporary Art Evening sale in New York.