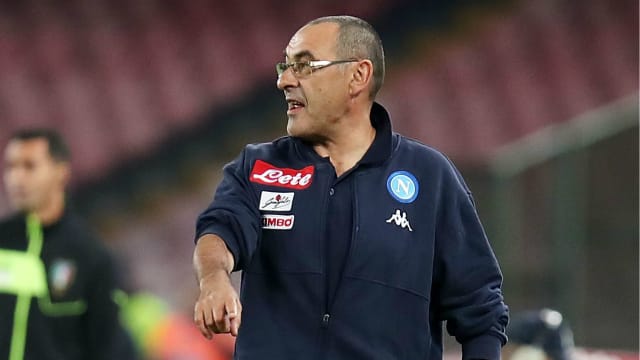 Maurizio Sarri understands why Gian Piero Ventura opted to ignore the claims of his forward Lorenzo Insigne as Italy missed out on World Cup qualification by losing their play-off against Sweden.

In a 2-1 home win against AC Milan on Saturday, Insigne looked in the mood to show Ventura - dismissed after Italy missed out on a World Cup place for the first time in 60 years - he was wrong to be left as an unused substitute in the second leg.

The forward raced on to a lofted throughball from fellow Italy international Jorginho to open the scoring and set up a victory that sent Napoli four points clear at the top of Serie A.

But Sarri said Ventura's system did not have an obvious place for wide forward Insigne, who had been used in central midfield when he came off the bench in Italy's decisive 1-0 first leg loss at the Friends Arena.

"I would not leave Insigne out, but each coach is the result of his experiences and Ventura always played with two up front," Sarri told Mediaset Premium after Napoli strengthened their Scudetto claims.

"I did not like the way the media tore Ventura apart, because when there is a loss like that, the blame is to be shared around, never just apportioned to one man."

Insigne, for his part, insisted he did not resent Ventura for leaving him on the sidelines after scoring his fifth goal in his last five appearances against Milan.

"I don't like to cause controversy," Insigne told Mediaset Premium. "He considered those [substitutes] to be the right men to reach the World Cup and I accept the decisions of the coach.

"I am sad because Italy are not going to the World Cup, not because I didn't play."

#Sarri: "We gave very little away today. It's just a shame we conceded that goal. We were superb in the first half"
#NapoliMilan 2-1  #SerieATIMpic.twitter.com/ej69l08JDs

Sarri's success at Napoli has inevitably led to rumours he could be a possible successor to Ventura.

But the 58-year-old followed Juventus coach Massimiliano Allegri and Inter's Luciano Spalletti in rejecting speculation linking him with the post, while accepting Napoli were not at their best against Milan.

"At the moment I am enjoying training these players and working every day on the field," Sarri added. "We're doing well and hope to achieve something at the end of it.

"It wasn't our sharpest performance, yet looking overall we allowed hardly anything and created eight clear scoring opportunities, so that's good in the circumstances.

"Our tempo dropped in the second half and we sat too deep, but despite that, we didn't allow many real chances. Almost everyone was off on international duty, so our fitness levels could not have been perfect.

"I am sorry we conceded a goal in stoppage time from distance, because it would have been nice to keep a clean sheet."