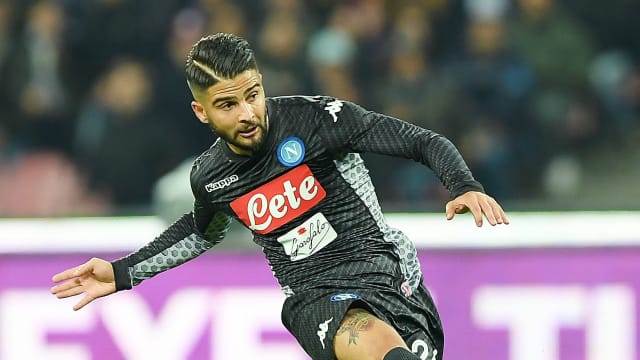 Lorenzo Insigne and Piotr Zielinski scored as Napoli beat AC Milan 2-1 at the San Paolo on Saturday to move four points clear at the top of the Serie A table.

Insigne was an unused substitute as Italy were beaten by Sweden in their World Cup play-off during the international break and he was on a mission to prove Gian Piero Ventura wrong.

Ventura was berated by Roma midfielder Daniele De Rossi for not turning to Insigne during the Azzurri's 1-0 aggregate loss, the coach paying for the defeat by losing his job.

And Insigne was on target as Napoli took the lead after 33 minutes thanks to a video assistant referee referral showing the forward was just onside when he ran on to Jorginho's terrific pass to score.

While Milan put the hosts under pressure in the second half, Napoli wrapped up the points when a sublime Dries Mertens pass sent Zielinski clear to nutmeg Gianluigi Donnarumma, with Alessio Romagnoli's injury-time effort a mere consolation.

Though the win sees unbeaten Napoli stretch their advantage over champions Juventus - who are in action at Sampdoria on Sunday - Milan stay four points adrift of the European places in seventh after suffering a sixth league defeat of the campaign.

Jorginho smashed an early effort over the crossbar for the hosts before Donnarumma made a smart near-post save after 13 minutes when Insigne floated a cross on to the head of Jose Callejon as the league leaders dominated the early exchanges.

Suso lashed Milan's first effort wildly off target before a more accurate strike from the playmaker called Pepe Reina into action for the first time.

Allan and Marek Hamsik both hit decent openings straight at Donnarumma, but Napoli's profligacy did not stop them breaking the deadlock, Insigne scoring his fifth goal in as many appearances against Milan.

6 - Lorenzo Insigne has netted 6 goals in 10 Serie A matches against AC Milan - at least two more than against any other side. Inspired. #NapoliMilan

Jorginho sent his fellow Italy international through on goal to beat Donnarumma with a smart lofted finish, the officials initially disallowing Insigne's strike before a video replay showed Romagnoli was playing him marginally onside.

Insigne went close to adding a second on the brink of half-time, but Donnarumma sprang high to his left to parry the shot away.

And the same pattern of play continued after the interval, the teenager denying Mertens and Hamsik in quick succession as Napoli sought a second goal.

A bright spell of Milan pressure yielded no clear chances, Leonardo Bonucci showing his frustration by shooting off target from the halfway line.

Perhaps inevitably, Napoli put the game to bed with a trademark counter-attack after 72 minutes.

Mertens sent Zielinski clear with a superb turn and pass, the Poland international rifling a first-time left-footed strike through the legs of an exposed Donnarumma.

Giacomo Bonaventura and Nikola Kalinic forced saves from Reina as a desperate Milan rallied and the visitors scored a consolation in stoppage time.

For once Napoli switched off at the back and Romagnoli smashed in a superb strike, but Maurizio Sarri's side held on to extend their unbeaten run to 25 Serie A games.

- Lorenzo Insigne has netted 6 goals in 10 Serie A matches against AC Milan - at least two more than against any other side.
- Napoli have won five of their last six league matches against AC Milan (D1 L0).
- AC Milan are only the second team to have had no touches in the opposition box in the first half of a Serie A game this season (after Benevento, who failed to do so against Napoli and Juventus).
- Gianluigi Donnarumma had eight saves tonight, his best tally in a competitive game for AC Milan this season.
- Zielinski's goal was the 100th conceded by Donnarumma in 92 appearances for AC Milan in all competitions.