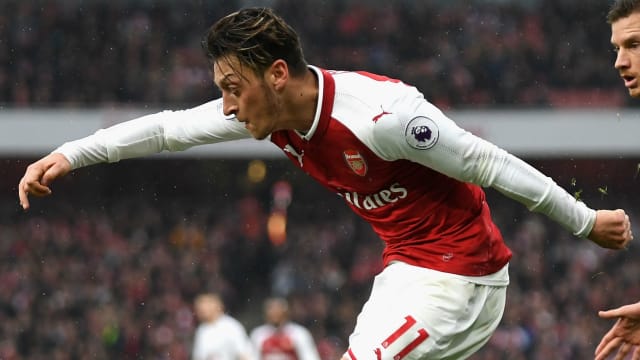 Mesut Ozil was happy to contribute to a fine team performance after the German played a starring role in Arsenal's 2-0 victory over Tottenham.

"Today, our aim was to do everything and at the end of the game we won. We are really happy," Ozil told Sky Sports.

"We have good quality. Lacazette and Alexis are always dangerous. Especially today with Alexis' goal, he showed his quality and I'm really happy for him to score against Tottenham.

"We're happy and the fans are happy."

4 - Arsenal have never finished lower than 4th at the end of every Premier League season in which they've beaten Spurs at home. Foregone. pic.twitter.com/QyKiZxjmqT

Ozil - who is out of contract at the end of the season - was the architect for the home side's opener in the 36th minute, as his free-kick allowed compatriot Mustafi to head home via a deflection off a post.

While replays showed the defender was fractionally offside at the point the ball was delivered into the penalty area, the goal was allowed to stand.

"I was only happy they didn't blow the whistle. It happened to me once before against Chelsea, but this time I got away with it," a relieved Mustafi said.

"That's football. Sometimes you get things that go against you, but at the end of the year it's even. You get good things, you get bad things. At the end, it's all fair.

"If you have players who can put the ball in like that, you go in with belief. The most important thing when you go up for corners and free-kicks is believing you can score."