It's a growth process - Montella optimistic despite Napoli loss 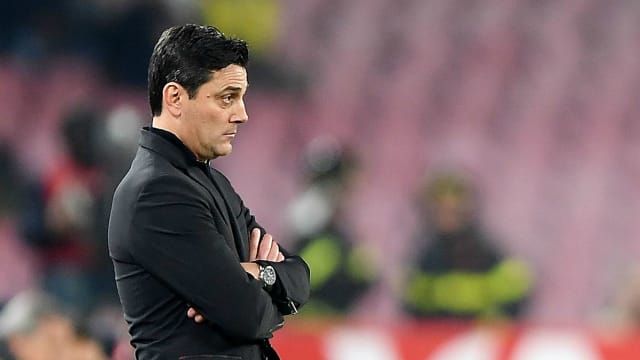 Vincenzo Montella claimed the most difficult part of the season is behind AC Milan after his side were beaten 2-1 at leaders Napoli in Serie A on Saturday.

Milan rarely threatened to cause an upset at the Stadio San Paolo, suffering a sixth Serie A defeat of the campaign after Lorenzo Insigne and Piotr Zielinski scored either side of half-time to set up the victory, although Alessio Romagnoli scored a memorable injury-time consolation.

Montella's side had won their two previous away league games to ease the pressure on the coach, but again came up short when faced with one of Serie A's elite sides.

Regardless of Milan looking a long way way off challenging for their target of Champions League qualification, despite huge levels of spending in the transfer market, Montella is determined to remain upbeat.

"I thank the club for giving me this support and confidence," Montella said. "I struggle to look at the table, but from now on we'll have a simpler fixture list and hopefully this type of performance will see us in good stead.

"Our last two defeats were against Juventus and Napoli, so of course they are ahead of us, but despite the results, we were in the games. We showed character, we are growing and it's a growth process.

"As I said, I am proud of the performances against Napoli, Juve, Roma and Inter [four defeats from four], because to get to their level we need patience.

"We play every three days, so there is not much time to train. We need results straight away and there is work to be done. We must be more clinical in the final third and have the goalmouth in our minds."

0 - AC Milan are only the second team to have had no touches in the opposition box in the first half of a Serie A game this season (after Benevento, who did so against Napoli and Juventus). Fear. #NapoliMilanpic.twitter.com/NRVQkvYici

But Montella, who lost key attacker Suso to injury shortly before the interval, accepted it is frustrating to see Milan fall short by small margins in matches against their Serie A rivals.

"We weren't incisive enough in the final third, but we caused Napoli a lot of problems," Montella said. "I am happy with the performance, the same amount as the anger I feel at losing when playing so well.

"I praise the performance, as we showed great character and our passing moves were improving too. When you lose badly, it's upsetting, and when you lose and deserved more, then that's upsetting too.

"Napoli have so much quality in attack and so many options to combine that if you get pinned back, you do risk conceding a goal. I preferred to attack them, as five in defence would have been too negative. I took a gamble. We also lost Suso before half-time and that forced more changes.

"I am truly optimistic, I don't know why. I feel we have already overcome the worst period of our season - and I see those in front going at a pace they cannot possibly maintain."