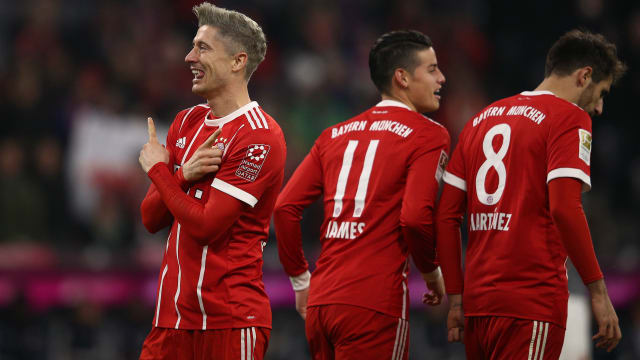 Robert Lewandowski's double helped Bayern Munich to a 3-0 victory over Augsburg at the Allianz Arena on Saturday as the champions capitalised on RB Leipzig's failure to win.

The Poland star took his tally for the season to 13 goals in as many league games, with Arturo Vidal also on the scoresheet, as Jupp Heynckes' side made it five top-flight wins in a row.

The hosts struggled initially to break down an Augsburg side who had won only one of their previous six matches, but an incorrect offside call went Bayern's way to allow Vidal to lash home a loose ball in the box.

Lewandowski struck following a fast break just before half-time and the 29-year-old netted his second at the end of a superb passing move early in the second half, as Bayern cruised to another three points and put more pressure on Augsburg boss Manuel Baum.

The victory also gives the champions a six-point lead at the top of the table, with Borussia Dortmund having lost to Stuttgart on Friday and Leipzig held to a 2-2 draw by Bayer Leverkusen.

Augsburg's good pressing game was keeping the home side frustrated despite their dominance of the ball, but the breakthrough came in the 31st minute, albeit in questionable fashion.

Lewandowski looked to be offside as he challenged for a header from a James free-kick, and when the loose ball broke to Vidal in the area, the Chilean lashed it high into the net on the turn.

Kevin Danso should have done better with a free header he sent straight into Sven Ulreich's grasp and Bayern punished that miss seven minutes before the break. Caiuby was dispossessed by Vidal in the centre circle and he sent Lewandowski clear into the box, where the striker slotted confidently past Hitz.

6 - Robert #Lewandowski is only the second @FCBayernEN player to score in each of the first 6 home games of a Bundesliga season after Gerd #Müller 1972-73. Record. #FCBFCA@FCBayernUS

Bayern's third came four minutes after the break at the end of a quite brilliant passing move. The home side, under heavy pressure from Augsburg, worked the ball from James in midfield to the back and eventually to Joshua Kimmich down the right wing, and his cross was expertly volleyed into the bottom-right corner by Lewandowski.

Vidal was just about denied by Hitz on the line after a glorious chipped pass from James, and the Augsburg keeper got fingertips to a fizzing Arjen Robben strike to keep the scoreline looking respectable, as Bayern eased through the closing stages to extend their run to nine games without defeat since Heynckes took charge.

The veteran had the added joy of celebrating his 500th Bundesliga win, 174 as a player and 326 as a coach.