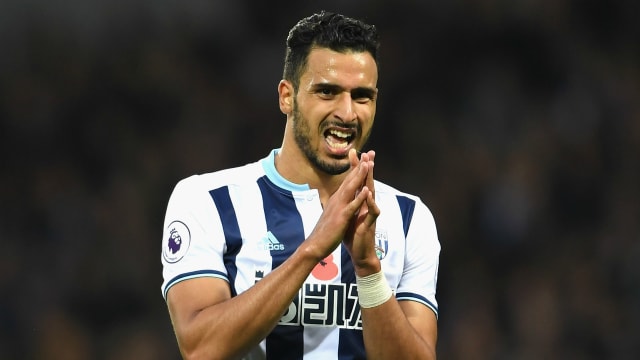 West Brom boss Tony Pulis has pointed the finger at Belgium over the thigh injury Nacer Chadli sustained in training on Thursday.

Chadli has been ruled out indefinitely after suffering the setback on his return to the club from a busy international break.

The 28-year-old completed all 180 minutes of Belgium's friendlies against Mexico and Japan despite having only appeared twice in the Premier League this season.

Pulis suggested the former Tottenham man had been overworked by his international coach Roberto Martinez.

"We are disappointed he played the two 90 minutes and has ended up getting an injury yesterday in training," Pulis said in his pre-match press conference.

"That is going to keep him out for the foreseeable future.

Catch me if you can  always an honour to play for Belgium!  pic.twitter.com/19S1A3KFv8

"Chadli missed the pre-season, we played him in a game and a half and he did not feel 100 per cent fit. Him going off to play for Belgium, and playing two games in a short period of time, has unfortunately caught him out.

"It is very, very unfortunate for us as a football club as well."

West Brom host Chelsea on Saturday before a trip to Wembley to face Tottenham the following weekend.