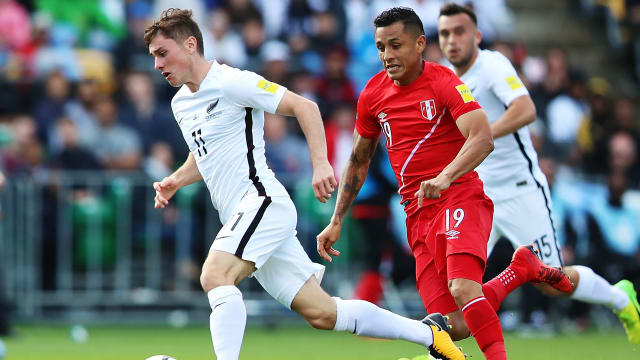 With a ticket to next year's showpiece tournament in Russia up for grabs, neither side could break the deadlock at a sun-bathed Westpac Stadium in Wellington.

Desperate to end their 36-year wait for a World Cup berth, South American visitors Peru largely controlled proceedings but they were unable to make their superiority count despite a scrambling goal-line save from All Whites goalkeeper Stefan Marinovic, who also denied Aldo Corzo in the second half.

New Zealand almost snatched victory at the death when Ryan Thomas unleashed a powerful volley which flashed agonisingly wide of the post.

Oceania champions New Zealand - participants at the 2010 World Cup - were dealt a major blow prior to kick-off with talismanic Burnley striker Chris Wood only fit enough for the bench having carried a reported hamstring issue into the clash.

Without Wood, who has 24 goals in 55 international appearances, the scoring burden fell on Melbourne Victory forward Kosta Barbarouses.

Peru - who finished fifth in CONMEBOL qualifying - were without star man Paolo Guerrero. The country's all-time leading goalscorer with 33 was ruled out of the play-off after testing positive for a banned substance.

Ricardo Gareca still had plenty of talent at his disposal via the likes of veteran Jefferson Farfan and Andre Carrillo, and the South American visitors were almost gifted a goal in the seventh minute.

Peru came within a whisker of capitalising on a mix-up between All Whites captain Winston Reid, Tommy Smith and Marinovic but the latter managed to scramble back in time and stop the ball on the line.

The Peruvians controlled proceedings and possession, though New Zealand enjoyed some forays forward, much to the approval of the All Whites' fans in the rugby-mad city, where love for the egg-shaped ball was put aside in pursuit of a ticket to Russia.

Peru were fortunate not to be reduced to 10 men when Yoshimar Yotun elbowed Reid in the back behind play - the Orlando City midfielder escaping with a yellow card to the dismay of the local supporters.

Chances were few and far between in the second half, though Peru came close to opening the scoring just past the hour-mark when Corzo rose highest from a corner but Marinovic spectacularly tipped the ball over the crossbar.

Peru were largely untroubled by New Zealand and All Whites head coach Anthony Hudson tried to change that by introducing star Wood with 16 minutes remaining and the hosts finished strongly without scoring, although Thomas went close.