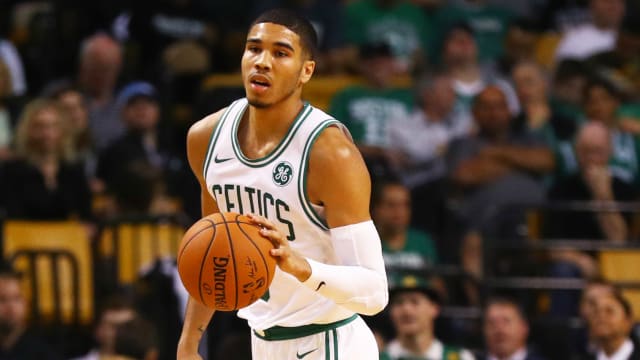 The Boston Celtics stayed hot in the NBA, while Paul George inspired the Oklahoma City Thunder to victory over the Los Angeles Clippers.

Boston extended their winning streak to 11 games with a 90-87 victory against the Charlotte Hornets on Friday.

The Celtics lost Kyrie Irving to a concussion but they still managed to rally past the Hornets in Boston.

George helped the Thunder by scoring 42 points with nine rebounds and seven assists in a 120-111 home win.

The Thunder star hit 13 of 22 shots from the field, including four of seven from three-point range.

Lou Williams led the Clippers 5-6 with 35 points and seven rebounds, but Blake Griffin mustered just 17 points on five of 19 shooting.

Reggie Jackson and Andre Drummond suffered disappointing seasons in 2016-17, but they have both looked like All-Stars this term. Drummond completed his ninth double-double already by scoring 16 points with 20 rebounds and seven assists in the Pistons' 111-104 win over the Atlanta Hawks.

Jackson added 22 points with six assists. He also made two clutch three-pointers late in the game to help the Pistons win.

Not only did the Hornets lead by 16 points at half-time, they were playing against a Celtics team without Al Horford (concussion), and then Irving left early with his own head injury. Still, the Hornets 5-7 scored just 11 points in the fourth quarter to allow the Celtics to rally for victory.

All-Star and early MVP favourite Giannis Antetokounmpo scored 28 points with 12 rebounds to lead the Milwaukee Bucks to a 94-87 win at the San Antonio Spurs.

What do you call this dunk? #FearTheDeer pic.twitter.com/SMnsCUl9al

Philadelphia 76ers guard Ben Simmons has been nothing short of elite in his de facto rookie season. Simmons is averaging 17.8 points, 9.4 rebounds and 7.8 assists per game, and he already has seven double-doubles and two triple-doubles. Reigning champions the Golden State Warriors are back on track with five successive wins after a slow start. They dismantled the young Minnesota Timberwolves earlier this week, so the 76ers may be destined for a similar fate.