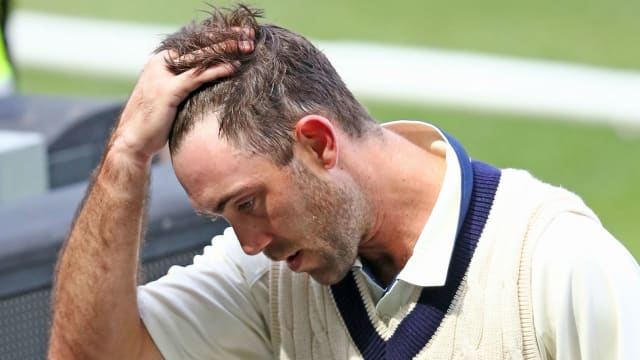 Maxwell is battling to retain his place in the side just a couple of weeks before Australia start their bid to regain the little urn at the Gabba.

The 29-year-old returned to form with two half-centuries in Victoria's drawn Sheffield Shield match against South Australia after failing twice against Queensland, but former Australia quick McDermott is not convinced Maxwell is suited to Test cricket.

He told Omnisport: "Number six is going to be a difficult one.

"I'm not sure whether Maxwell is the man for the job. Whilst he is a very talented batsman, he's not really fired in Test cricket when he's had a chance and sometimes you just don't know what you're going to get with him.

"I don't know if Test cricket is his game really."

Marsh is not expected to be able to bowl until late next month or early January after undergoing shoulder reconstruction, but McDermott said he would be the ideal candidate for the all-rounder spot.

"I think they are going to go with the three pacemen and a spinner, so there is what you've got and if you've got a batsman who can bowl a bit, that helps out. " the ex-Australia bowling coach added.

"That was probably a Mitchell Marsh, but whether they head down that track, I'm not sure.

"I'm a pretty big fan of Mitchell Marsh, he is the ideal guy you would want at number six. He's an excellent batsman and can bowl with good pace and get bounce. That is obviously handy at the Gabba.

"I definitely wouldn't pick another guy to bowl spin, as we have Nathan Lyon to do that and if you need somebody to mix it up and give him a rest, the captain can bowl."