He Said What?! The Best NFL quotes of week nine 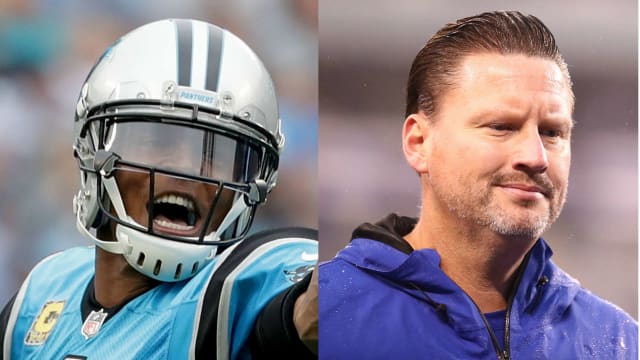 Ben McAdoo is likely a dead man walking as the Giants head coach. Sunday's half-time speech, or lack thereof, didn't help as the Giants were throttled by the Rams to fall to 1-7 for the season.

The Texans are still weighing their quarterback options after rookie Deshaun Watson was lost for the season last week.

Someone should remind Patriots defensive coordinator Matt Patricia the Broncos have only two pass plays of 40 yards or more, tied for second-worst in the league.

Here's the latest edition of "He Said What?!"

-- Giants cornerback Dominique Rodgers-Cromartie on the team's 1-7 record: "You can't put that on the coaches. Not the way we're playing. That's the defense. Ask any of us, we've blown coverages, people wide open, you can't fire no coach for that. Fire a player, or something's got to give."

-- Newton on the Panthers trading wide receiver Kelvin Benjamin to the Bills: "We just lost a great player but nevertheless, the Titanic still has to go."

-- Texans coach Bill O'Brien on the possibility of signing former 49ers quarterback Colin Kaepernick: "Everybody gets discussed. Is that a problem? Don't most teams do it like that? We talk about the roster and what's out there every day."

-- Texans quarterback Tom Savage on his performance in Sunday's 20-14 loss to the Colts: "I played like c**p. That's what it is."

-- Patricia on the Broncos 17th-ranked offense: "This is an explosive team that can really hurt you at any time, so you've got to make sure that you're fundamentally sound there."

-- Brady on the possibility of one day being traded: "Everyone has the opportunity to go to another team or get traded, or cut, or released. I have played with so many great players that that has happened to, several times, and coaches too. Player movement is not new to anyone."

-- Former Patriots quarterback Jimmy Garoppolo on last week's trade to the 49ers: "It was a bit of a whirlwind, but it's starting to slow down."

-- Bengals receiver A.J. Green on his fight with Jaguars cornerback Jalen Ramsey: "As a player, as a man, as a father, it's a reflection of me. I should have just walked off in that whole situation. It got the best of me today. But I'll definitely learn from the experience. It's never going to happen again. I regret my actions."

-- Del Rio on Raiders offensive tackle Marshall Newhouse picking up a fumble and running before getting hit and fumbling himself: "You can see he's an athlete. He was going to go at least another four or five yards."

-- Browns general manager Sashi Brown on the botched trade for Bengals quarterback AJ McCarron: "It's a lot simpler than what's been written. Truly, this is just a matter of getting to a deal too late in the process... It just didn't happen. It is truly that simple... Nothing we would ever do to try to make up a trade, to sabotage a trade, it just wouldn't make any sense."