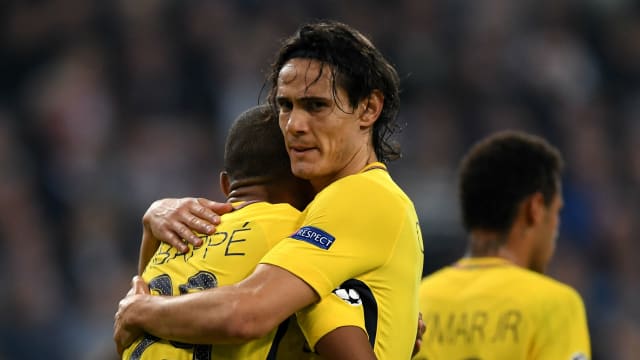 Edinson Cavani racked up a century of Ligue 1 goals as Paris Saint-Germain smashed Angers 5-0 on Saturday.

Having scored 112 times in Serie A before swapping Italy for the French capital, Cavani is just the third player in the last 20 years to score 100+ goals in two of Europe's top five leagues - Gonzalo Higuain and Zlatan Ibrahimovic the others.

Cavani's first breakaway strike came in a dominant first half in which Kylian Mbappe and Julian Draxler latched onto Dani Alves deliveries to score.

Angel Di Maria and Neymar were not at Unai Emery's disposal at the Stade Raymond Kopa, but it mattered little as the leaders cruised to their 10th league win of the season.

The effervescent Cavani ran almost the length of the field twice inside a minute before scoring his second, taking his tally for the season to 13 in Ligue 1 already, before Mbappe rounded goalkeeper Michel to register his first brace for PSG to cap a fine win.

A trip to last season's champions Monaco, who are second, lurks later this month, but the Parisians look irresistible on this form, sat in top spot and having qualified for the Champions League last 16 in record-breaking fashion.

Angers had won just one of their last nine league games, but they were on the path to defeat in this game as early as the fifth minute when Alves was given the freedom of the right flank to deliver a cross for Mbappe, who sent a swivelling shot across Michel and into the far corner.

Thomas Mangani blazed over as Angers carved out a rare sight of goal, but more slack defending cost them soon after, Alves allowed to trundle forward before slipping a pass in behind the backline for Draxler to dink over the goalkeeper.

Mbappe swung a wild effort high and wide, but PSG's third was not too far behind and it was a notable effort for their number nine.

Alves was again involved, freeing Mbappe in the right channel and the teenager's smart flick presented Cavani the chance to score which he took powerfully with a first-time effort.

The goal summed up the very best of Cavani, who charged back into his own half to win the ball, before sprinting back up the other end to latch onto Adrien Rabiot's pass and rifle into the net.

Mbappe rounded off the scoring, racing clear on the end of substitute Lucas Moura's pass before finishing calmly - the teenager denied a hat-trick from close-range soon after as PSG delivered an ominous destruction without their star turn Neymar.