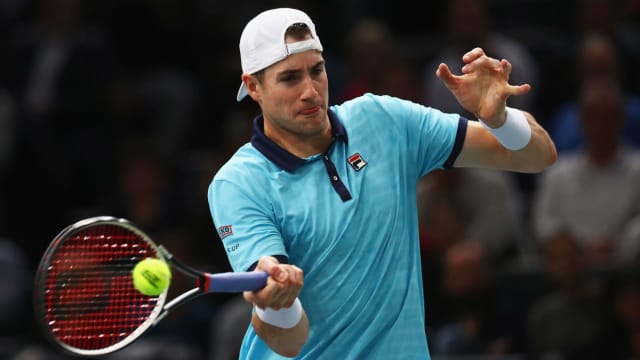 John Isner and Jack Sock have London in their sights after taking their place in a Paris Masters semi-final line-up which does not include Rafael Nadal, while Julien Benneteau stunned Marin Cilic.

Juan Martin del Potro went into his quarter-final with Isner on Friday knowing a victory would be enough to seal the final ATP Finals spot, but the towering American pulled off a 6-4 6-7 (5-7) 6-4 win in Bercy.

Del Potro's late-season charge was brought to a halt, leaving Isner two wins away from what appeared to be such an unlikely place in the season-finale at the O2 Arena.

A tournament victory in the French capital would enable Isner, beaten by Andy Murray in the final 12 months ago, to achieve that feat and the same goes for Sock, who came from a set down to beat Fernando Verdasco 6-7 (3-7) 6-2 6-3.

"But now, certainly I'm not going to lie to you guys, it's in my mind now. It would be great to qualify for that."

Juan Martín del Potro's thrilling race to London is over, but @JohnIsner's is very much alive in Paris!#RolexPMasterspic.twitter.com/0bWoBxsEcl

World number one Nadal pulled out of the tournament ahead of his quarter-final with Krajinovic due to a knee injury and offered no guarantees he will be fit for the ATP Finals.

If neither American lifts the trophy on Sunday, then Pablo Carreno Busta will be bound for London.

The Spaniard will be hoping for a favour from either Krajinovic or wildcard Benneteau, who continued his seed-conquering exploits with a shock straight-sets victory over Cilic.

Benneteau has had a week to remember in his homeland, the world number 83 beating Jo Wilfried Tsonga, David Goffin and now third seed Cilic 7-6 (7-5) 7-5.

Standing between Benneteau and a spot in the decider will be Sock after his gritty win late in the day against veteran Verdasco.
Tags
Read Full Story