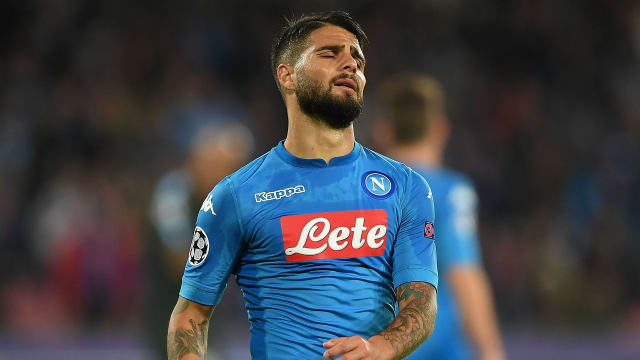 Pep Guardiola's men advanced to the knockout round of the competition thanks to an absorbing 4-2 victory in Naples.

Napoli and City played out a thrilling contest in last month's reverse fixture in Manchester - won 2-1 by the Premier League leaders - and another match to remember caught fire when Insigne gave the hosts a dream start in the 21st minute.

City, on the backfoot due to Napoli's intense pressing game early, responded with back-to-back goals from defensive duo Nicolas Otamendi and John Stones, the latter putting the visitors ahead three minutes into the second half.

Napoli midfielder Jorginho equalised with a penalty just past the hour-mark for the Serie A leaders but City showcased their counter-attacking prowess as Sergio Aguero's goal - which broke the club's scoring record - and Raheem Sterling's late strike settled the Group F clash.

"The result is unfair considering the performance we put in," Insigne told Mediaset Premium.

"There are some regrets, as we put the best team in Europe under the cosh for a good long while.

"We must use this to face Sunday's game with the same mentality in Serie A."

Insigne, however, has not given up hope of progressing in the Champions League with games against Shakhtar and Feyenoord to come.

The Italy international added: "We still believe, because if we keep playing like this, we'll get some satisfying moments.

"There are regrets, as we could've won it. At 2-2, their goalkeeper [Ederson] made a great save on [Jose] Callejon and we immediately conceded after that.

"We have to study the details and whittle down some of the errors."