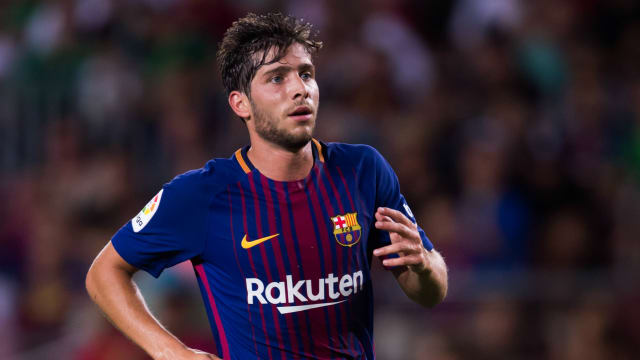 Barcelona will find out the extent of Sergi Roberto's right hamstring strain on Wednesday after he was forced off during his side's 0-0 draw with Olympiacos.

Spain international Roberto was hurt while making a tackle in the closing stages of the first half of the Champions League game at the Karaiskakis Stadium.

The versatile midfielder, who has also lined up at right-back this season, picked up a booking for the challenge before being replaced by Gerard Deulofeu.

The club confirmed the injury during the half-time interval and announced the 25-year-old will undergo further examination on the club's return to Spain.

Sergi Roberto has a right hamstring strain. On Wednesday he will have more tests to find out the exact extent of the injury #FCBlivepic.twitter.com/FzjvvJOFCX

Barcelona, who failed to score in a Champions League group game for the first time since December 2012, face Sevilla at Camp Nou on Saturday before a two-week international break.

They will hope to do better in front of goal at the weekend after failing to capitalise on their dominance against Olympiacos, who clung on in the second half to pick up their first point of the campaign.

"We played well but we lacked a finish and that's the most important thing," midfielder Sergio Busquets told the media.

"We tried everything, we created good chances, we hit the woodwork, but sometimes the ball won't go in.

"We just continue now. We are in a terrific position and what's more out of every 100 games we play like that one we'd win 95 times."

0 - Barcelona have failed to score in a #UCL group game for the first time since December 2012 against Benfica (0-0). Novelty. pic.twitter.com/anvy1FyIat