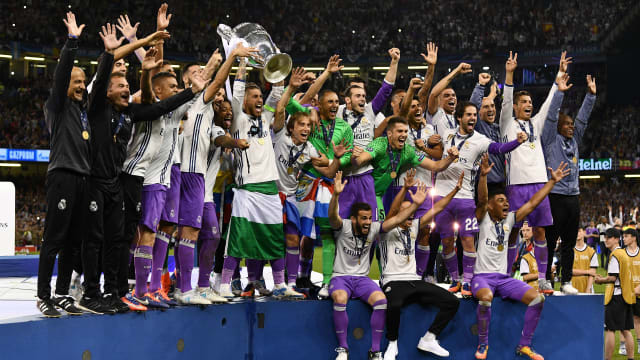 Cristiano Ronaldo was named as one of five Real Madrid players as the Spanish and European champions dominated the FIFA FIFPro XI of 2017.

Defenders Sergio Ramos and Marcelo and midfield duo Luka Modric and Toni Kroos were also selected in the dream team, who were honoured at the FIFA Best Football Awards in London.

Juventus, who were beaten 4-1 by Madrid in June's Champions League final were represented by veteran goalkeeper Gianluigi Buffon, who also scooped the FIFA Best Goalkeeper prize.

Leonardo Bonucci and Dani Alves - both of whom lined up for Serie A champions Juve against Madrid in Cardiff but subsequently moved on to AC Milan and Paris Saint-Germain respectively - completed the defensive unit in the combined team, while Barcelona great Andres Iniesta joined Kroos and Modric in midfield.

Ronaldo lined up with great rival Lionel Messi and Neymar in attack. The three superstar forwards were also in the running for the FIFA Best Men's Player award.

"It's a great achievement, I feel so proud," said Ronaldo, whose coach Zinedine Zidane triumphed in his individual category.

"It talks many, many hours of dedication. To be on the stage 11 times [as a member of the FIFPro team], it's a lot. Thank you to the people who voted for me."