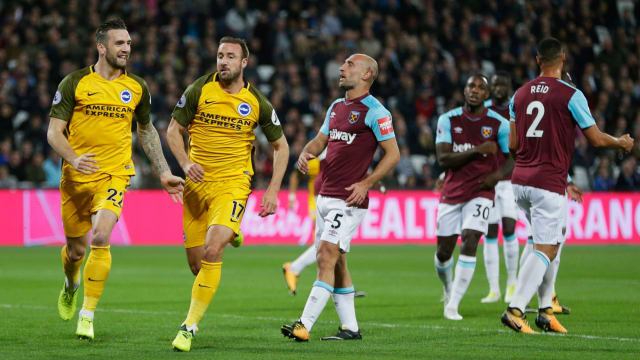 Slaven Bilic does "not want to hide" after West Ham were comfortably beaten 3-0 by Brighton and Hove Albion at London Stadium on Friday.

After beginning the Premier League season with three straight defeats, West Ham lost one of the following five to seemingly ease the pressure on the Croatian.

However, Brighton, previously winless on the road in the top flight this season, inflicted the Hammers' heaviest home league defeat to a promoted side since 1931 to put Bilic back under fire.

West Ham could now end the weekend in the relegation zone and face Crystal Palace in a potentially critical London derby for Bilic next week, after they have travelled to Tottenham in the EFL Cup.

The 49-year-old took full responsibility for the result and felt Jose Izquierdo's strike in the second minute of first-half stoppage time - which was sandwiched between a Glenn Murray double - provided a telling blow.

"The board will do what they are going to do. It is their decision. We have been in this situation before and we got out," Bilic told Sky Sports.

"It was a bad performance. The goals killed us, the first one very quick. Between the first and second goal we were dominating the game.

"They defended the box really well and at the end of the first half we conceded from a bit of skill from their player. It is very hard for me to say anything clever in this moment apart from it's very disappointing."

A first away #PL win of the season for @OfficialBHAFC#WHUBHApic.twitter.com/XxtdaFsadM

Brighton boss Chris Hughton was delighted with his side's defensive efforts as they won their first-ever away match in the Premier League.

"I thought it was outstanding," said Hughton. "A huge part of the game is how you defend. You can't stop all the crosses going in - they have really good quality - but you have to defend well. It gives you the platform to have chances yourself and we did that.

"I'm as pleased with the clean sheet as I am with the goals. We used the ball well, nullified the qualities they have and scored good goals ourselves.

"To come away with a clean sheet in this type of environment shows real quality, real discipline."