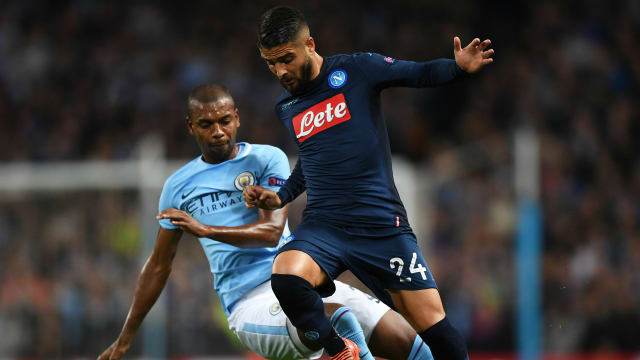 Lorenzo Insigne said he is not sure whether he will be fit enough for Napoli's Serie A showdown with Inter after limping off in Tuesday's loss to Manchester City.

Insigne, 26, hobbled off with an apparent thigh injury as high-flying Napoli suffered a 2-1 Champions League defeat at City.

Italian leaders Napoli will be sweating on Insigne's fitness ahead of Saturday's blockbuster against Inter, with both teams putting their unbeaten records on the line.

"I feel much better now than when I did as I asked for the substitution," the Italy international, who has scored five goals in all competitions this season, told Mediaset Premium.

"We'll see tomorrow if I'm able to play against Inter."

Napoli have made a record-breaking start to the Serie A season, winning their opening eight matches.

However, Maurizio Sarri's men crashed back down to earth at the Etihad Stadium, completely outclassed against free-scoring City in the first half.

Raheem Sterling and Gabriel Jesus scored within the opening 13 minutes as Napoli struggled to keep up with Pep Guardiola's side in Manchester, though Dries Mertens had a penalty saved before half-time.

Napoli eventually settled in the second half, stemming the tide and producing the football expected of them as Amadou Diawara converted his spot-kick with 17 minutes remaining.

"We stepped on to the field feeling too timorous and Manchester City moved the ball very quickly, the kind you don't see every day," centre-back Kalidou Koulibaly told Mediaset Premium.

"The two goals we conceded were disappointing, but towards half-time we had already started playing better and felt freer. In the second half, we did well.

"It was a defeat this evening, but we have to take the positives from this match too. We want to qualify for the next round. The return match with City will be different."