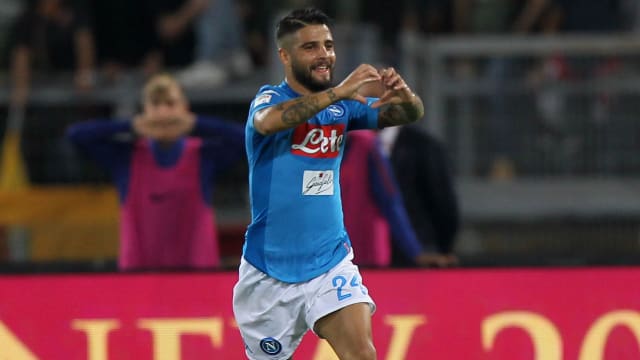 A first-half Lorenzo Insigne goal maintained Napoli's 100 per cent start to the season as a 1-0 win over Roma at the Stadio Olimpico extended their lead at the Serie A summit to five points.

Maurizio Sarri's side dominated from the outset and took full advantage of Juventus' 2-1 defeat to Lazio earlier in the day.

There was a touch of good fortune about the diminutive Insigne's strike - the 100th goal of his career - after 20 minutes as the ball was deflected invitingly into his path by a Roma defender, and the Italy international coolly slotted past Alisson into the bottom-left corner.

Dries Mertens, who has already scored seven times this season, had two excellent chances to add to his tally in the first half but was thwarted by Alisson on both occasions.

The Belgian then had another glorious chance 10 minutes into the second period after he had picked the pocket of Kostas Manolas, but he skewed his effort wide of the far post.

Napoli goalkeeper Pepe Reina was a virtual spectator but produced a superb save with 20 minutes remaining to tip substitute Federico Fazio's nodded effort onto the post, while Edin Dzeko clipped the crossbar with a late header as the hosts tried in vain to grab an equaliser.