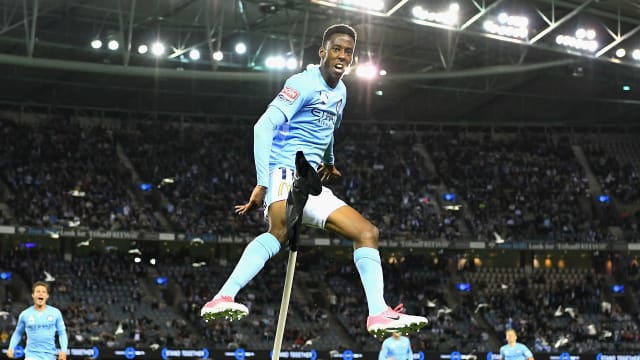 Melbourne City claimed the local bragging rights as they prevailed 2-1 at Melbourne Victory in a spicy A-League derby encounter.

Carl Valeri's rash tackle on City's Michael Jakobsen inside the first 20 second sparked pushing and shoving between the sides and referee Peter Green had brandished three yellow cards by the 12th minute.

Rhys Williams became the third Victory player into the book for a scissoring challenge in the 32nd minute that forced Osama Malik to limp off with a hip problem.

Replacement Marcin Budzinski made a swift impact by clattering his maiden City goal into the roof of the net in first-half stoppage time.

What a way to open your account for @MelbourneCity. Take a bow, Marcin Budzinski!#MelbDerby#ALeaguepic.twitter.com/1nTCoOcrv4

Warren Joyce's men were under heavy pressure but sealed the points on the break 10 minutes later when Bruce Kamau burst forward brilliantly on the break.

At the end of a lung-busting run, the winger's eventual shot took a decisive deflection off Victory captain Valeri and looped home.

This is what it means. #MelbDerbypic.twitter.com/wIL0dKJGHN

In Saturday's earlier game, Western Sydney Wanderers were twice forced to come from behind in order to claim a 2-2 draw at home to Central Coast Mariners.

Asdrubal scrambled a 21st-minute opener from close range for the visitors but Oriol Riera levelled from the penalty spot.

The Mariners were ahead after the hour once more when Daniel De Silva coolly clipped home Andrew Hoole's excellent throughball but Roly Bonevacia ensured their joy was short-lived.