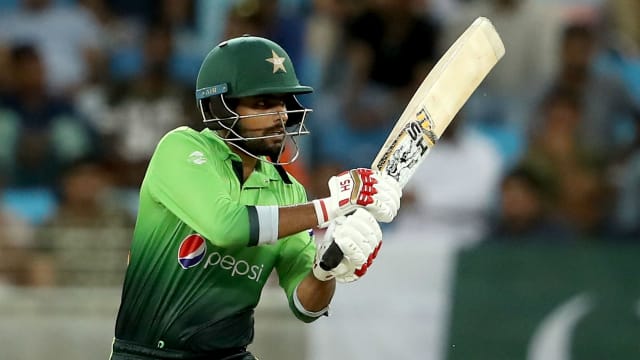 Pakistan claimed a 1-0 lead in the one-day international series against Sri Lanka with an 83-run victory thanks to Babar Azam's century and fine bowling from Rumman Raees and Hasan Ali.

Sri Lanka were buoyant after earning a historic 2-0 Test series win earlier this week, but Pakistan got off to a promising start in the quest to gain a measure of revenge in the five-match ODI contest.

Babar struck a patient 103 from 131 balls and, given excellent support by Shoaib Malik's more rousing 81 from 61, propelled the home side to 292-6 in Dubai.

The tourists swiftly found themselves five wickets down in response as seamers Raees (3-49) and Hasan (3-36) did the bulk of the damage and their efforts left Lahiru Thirimanne (53) with too much to do as Sri Lanka could only make 209-8.

Pakistan began steadily but after the loss of Ahmed Shehzad for a 12-ball duck, Fakhar Zaman took on the role of aggressor and slog-swept the first six off Akila Dananjaya to move to 43 but was castled next delivery by a fine googly.

Dinesh Chandimal dropped a tough chance at midwicket with Babar on 42 but in the next over Sri Lanka did break through as Mohammad Hafeez (32) fell to a Jeffrey Vandersay long hop.

Babar passed fifty at the start of the 32nd over but enjoyed a slice of luck from the next ball as he appeared to glove Dananjaya behind, with Sri Lanka left to rue an earlier wasted review.

The first of Shoaib's two sixes was his 100th in ODIs as he looked to accelerate, but he holed out off Suranga Lakmal prior to Babar bringing up his hundred, before the latter and Sarfraz Ahmed (1) perished in the final two overs.

.@realshoaibmalik is now member of 100 ODI sixes club. He is 5th Pakistani to hit 100+ sixes in ODIs #PAKvSLpic.twitter.com/OE1EGrx2ba

Niroshan Dickwella (19) struck three early boundaries in Sri Lanka's reply but soon edged Raees behind, while Chandimal was pinned lbw by the same man before Hafeez (1-32) got one through the defences of captain Upul Tharanga (18).

Hasan's first victim was Kusal Mendis, caught behind for two, and when he cleaned up Milinda Siriwardana next ball the tourists were rocking at 67-5.

Thisara Perera (21) offered vague hope alongside Thirimanne but when Raees returned to trap the latter the game was all-but over.

Dananjaya and Vandersay did their best to keep Tharanga's side in with a chance as they shared a 68-run stand for the eighth wicket, but it proved too much as Sri Lanka - who have now lost their last seven ODIs - were left to lick their wounds ahead of the second game in Abu Dhabi on Monday.