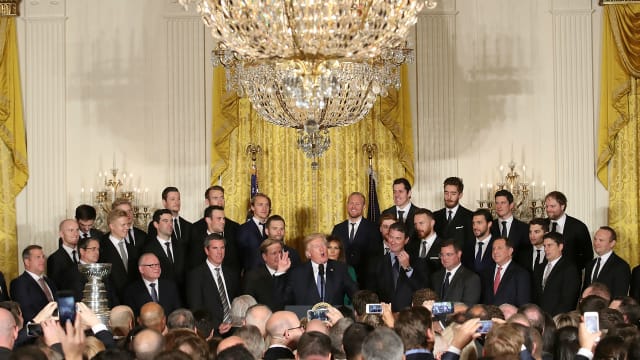 Trump applauded the "true champions and incredible patriots" during the event, saying the Penguins "embody the values of dedication, discipline and hard work" while also saluting their "incredible, loyal fans" as the "real MVPs".

The team has said since issuing a September 24 statement accepting Trump's invitation that their respect for the "Office of the President" and the "long tradition" of championship teams visiting the White House is a custom they intend to continue.

Last month, it was announced that Pittsburgh mayor Bill Peduto would skip the appearance at the White House, and Allegheny County executive Rich Fitzgerald joined Peduto in taking a knee for the team's visit.

Both Peduto and Fitzgerald were with the Penguins for their visit celebrating their 2016 Stanley Cup championship last October, when Barack Obama was in the Oval Office.

Trump has been under fire in recent weeks after tweeting that NFL players who kneel should be "fired" and rescinding his invitation to NBA champions the Golden State Warriors to visit the White House after Stephen Curry expressed his hesitation regarding the team's trip.

USA vice-president Mike Pence also caused a stir on Sunday when he left the Indianapolis Colts' home game against the San Francisco 49ers early because players protested during the national anthem, tweeting that he would "not dignify any event that disrespects" the flag.