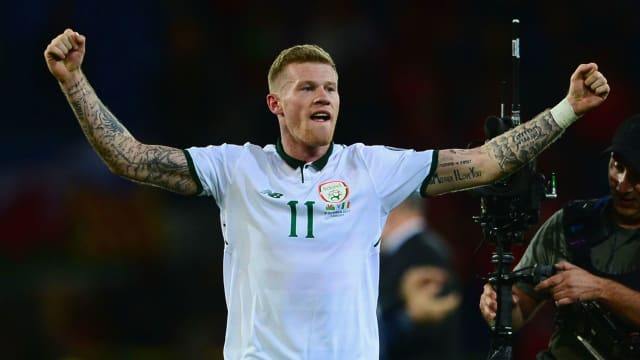 James McClean revelled in proving those who doubted the Republic of Ireland wrong as Monday's 1-0 victory over Wales in Cardiff secured a World Cup play-off spot at the expense of their hosts.

McClean fired home a sweet second-half strike to keep Ireland's hopes of making the tournament in Russia next year alive, capitalising on a loss of concentration at the back from Wayne Hennessey and Ashley Williams.

Wales were without injured superstar Gareth Bale and struggled for creativity after losing Joe Allen to a head injury in the opening period, despite dominating the ball.

It was the third time McClean has hit the winner in Ireland's qualifying campaign and he was delighted with their response to adversity.

"A lot of people wrote us off and didn't give us a chance tonight - even more so considering that we needed to win.

"But we showed our character and our quality. We dug deep and now we will enjoy this.

"I remember it just coming across, there was a great dummy by Harry [Arter], whether he knew or not I was behind him, only he knows, but as it was coming I was just concentrating on keeping it down.

"That feeling when it hit the back of the net...there's no better feeling on a football pitch."

McClean hopes that Ireland can build on a huge win and come out on top against whoever they face in the play-offs.

"We are not there yet. It was a big night tonight and we will enjoy it, but it means nothing if we don't go on and qualify.

"We will enjoy tonight and then look forward to whoever we get."