Exeter seize top spot as Northampton slip up away at Kingsholm 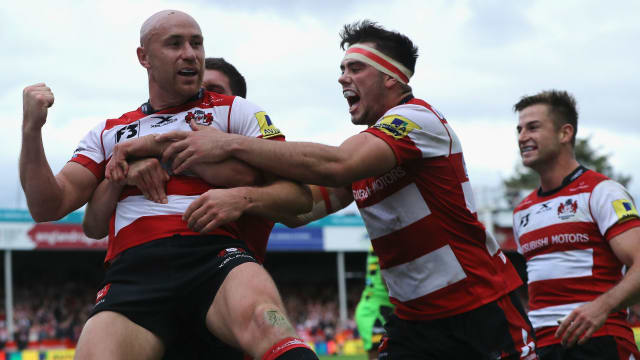 Exeter Chiefs have moved to the top of the Premiership after a 34-24 win over Newcastle Falcons as previous leaders Northampton Saints went down 29-24 at Gloucester on Saturday.

The reigning champions clipped the high-flying Falcons' wings thanks to Gareth Steenson's boot, the fly-half kicking three conversions and two penalties to settle a game that saw both teams score four tries.

Vereniki Goneva touched down with five minutes to go to make sure Newcastle at least left Sandy Park with something for their efforts.

Northampton also had to settle for a losing bonus point from their trip to Gloucester, who bounced back impressively after their 57-10 humbling at Sale Sharks last time out.

Henry Trinder grabbed a brace of tries while Jason Woodward, Billy Twelvetrees and Willi Heinz also crossed for the Cherry and Whites, who have now won all three of their league games at Kingsholm this season.

Northampton managed tries through Jamie Gibson, Harry Mallinder and Mike Haywood, the latter's effort setting up a rousing finish that saw Gloucester forced to hold on under heavy pressure.

Leicester Tigers are up to sixth after they held off a London Irish fightback to triumph 28-27 at the Madejski Stadium.

George Ford kicked 13 points for the Tigers, who have now won four on the spin in the Premiership. They led 28-13 at one stage in the second half but failed to score a fourth try to grab an extra point.

Worcester Warriors are still stuck at the bottom of the standings after going down 29-13 at Bath. Aled Brew bagged two tries for the home side at the Rec, although they finished the game with 14 men after debutant Freddie Burns was red-carded for a tip tackle in the second half.