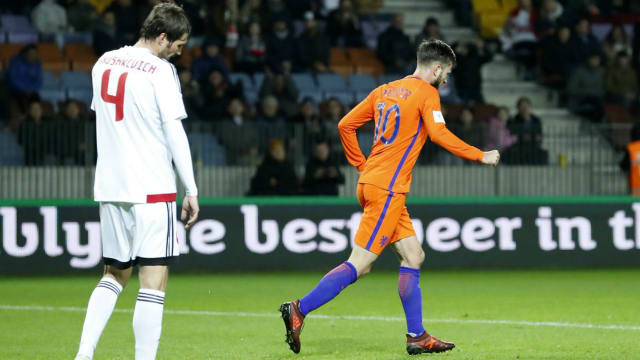 Netherlands survived a huge scare as Arjen Robben and Mephis Depay scored late goals to edge Belarus 3-1 in a crucial World Cup qualifier, though they remain on the brink of elimination.

However, Dick Advocaat's men remain unlikely to catch second-place Sweden following their earlier 8-0 rout of Luxembourg - they require a seven-goal victory when the two nations meet on Tuesday.

Needing a minimum of six points from their final two matches to have a chance of claiming a play-off spot, the visitors took a narrow 1-0 lead into the break courtesy of Davy Propper.

But Netherlands appeared certain to be absent from a second major international tournament in succession when Maksim Volodko stunned them midway through the second half.

Just as all hope appeared lost, Robben was gifted the chance to restore the lead with a spot-kick and Depay made sure of an essential victory.

2 - Since the World Cup 2014, the Netherlands have recorded only two clean sheets in 17 games on foreign soil (25 goals conceded). Leaky.