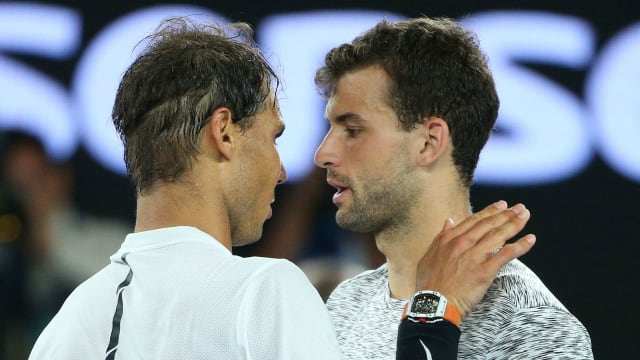 Rafael Nadal will seek to extend his impressive record against Grigor Dimitrov in the China Open semi-finals after the world number one downed John Isner on Friday.

The Spaniard was typically classy against a difficult opponent, whose challenge ended in a one-sided second-set tie-break, with Nadal triumphing 6-4 7-6 (7-0).

Up next for the 16-time grand slam champion is third seed Dimitrov, who has fallen to defeat in eight of his nine career meetings with Nadal, but has three tournament wins under his belt in 2017.

"He is a player that I really like, a good friend on the Tour," said Nadal, who won this tournament in 2005.

"He's a great guy. I think Grigor is a player who always plays with a great attitude, with a positive character.

"I'm happy for him that he's having a good year."

#ChinaOpen semi-finals are locked in...

Who will reach the final? pic.twitter.com/ixnmdRZSa7

The Bulgarian boosted his ATP Finals hopes with a battling 7-6 (7-5) 4-6 6-2 victory over Nadal's compatriot Roberto Bautista-Agut.

Nick Kyrgios will face Alexander Zverev in the other last-four clash after Steve Darcis retired hurt against the Australian.

It took just 30 minutes for Kyrgios to open up a 6-0 3-0 lead over Darcis when the Belgian, struggling with a neck injury, called it quits.

Zverev's 6-3 6-3 win against teenager Andrey Rublev kept the German on course for his sixth title of a superb campaign and secured his own spot at the ATP Finals for the first time.