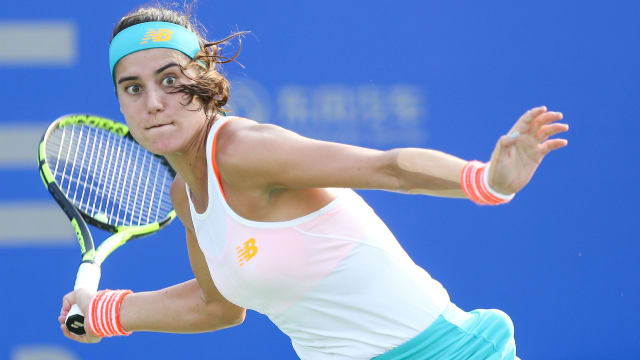 Sorana Cirstea will face her doubles partner Jelena Ostapenko in the quarter-finals of the China Open after claiming the scalp of fourth seed Karolina Pliskova.

The unseeded Cirstea mounted a stirring second-set fightback to defeat the former world number one 6-1 7-5 in Beijing on Thursday, her first win over a top-five opponent for over four years.

World number 44 Cirstea won 69 per cent of points on her first serve and broke three times in each set to seal an unexpected place in the last eight.

Pliskova had four set points in the second set, but Cirstea hung in there and won five games in a row to ensure she will find herself on the opposite side of the net to Ostapenko, who was leading 3-0 in the first set when Peng Shuai retired due to a knee injury.

Caroline Garcia continued her outstanding form with a 6-2 6-1 success over Alize Cornet in an all-French affair to keep her hopes of qualifying for the season-ending tournament in Singapore alive and Barbora Strycova thrashed Daria Gavrilova 6-0 6-4.

SCORE NO CONCERN TO DIALLED-IN CIRSTEA

Cirstea was on the brink of losing the second set when a resurgent Pliskova led 40-0 at 5-2 on serve, but the Romanian said she was not aware of how close she was to being pegged back until after the match.

"My coach told me that I was down 5-2, 40-0 in the second set, and I didn't even realize it," the 27-year-old said. "I was just playing point by point, I was trying not to focus on the score. I was just trying to play the right ball at the right time.

"And I think for me it worked, because I didn't put any pressure on myself. It didn't feel like a comeback because I was not so aware of the score. But it was definitely nice to finish in two sets."

DOMINANT KVITOVA SERVES UP A TREAT

Kvitova has now won seven of her meetings with Wozniacki and has won three straight in only two sets.

The 12th seed's reliable serve laid the foundations for her latest success over the former world number one, who failed to secure a single break.

Kvitova will take on Strycova at the quarter-final stage after peppering Wozniacki with powerful first and second serves, edging the second set after winning six games in a row to take the opener.

SINGAPORE-CHASING GARCIA IN THE GROOVE

Garcia is up to a career-high ranking of 15 after landing the biggest win of her career at the Wuhan Open last weekend.

Svitolina will face Garcia in the quarter-finals after the unseeded Frenchwoman stretched her winning streak to eight matches.

Garcia must reach the semi-finals in order to have any chance of denying Johanna Konta the eighth and final WTA Finals spot. Vesnina will not play in Singapore, as she needed to win the title this week to stay in the hunt.