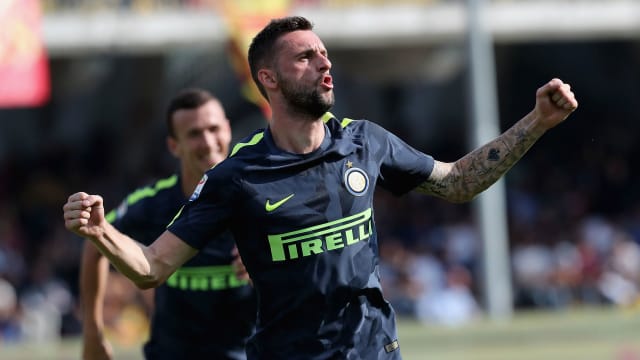 Inter extended their unbeaten run to seven games under Luciano Spalletti as Marcelo Brozovic's quickfire double helped them to a 2-1 victory over Serie A basement club Benevento.

Brozovic has failed to cement a place in Spalletti's first-choice starting XI during the opening stages of the campaign, but he did his chances of doing so no harm with a fine brace midway through the first half at Stadio Ciro Vigorito.

Having headed in his first goal of the season to put Inter ahead, Brozovic displayed his quality with a sumptuous free-kick moments later.

And that strike ultimately proved decisive, with Benevento's second league goal of the season - courtesy of Marco D'Alessandro - applying some pressure.

Indeed, Inter were fortunate not to be pegged back in the second half, Spalletti's side saved by the woodwork from D'Alessandro's header.

However, despite Benevento pushing for a first point of the campaign, a comeback never materialised, and Inter claimed the spoils to move - temporarily at least - above Juventus into second place.

Spalletti's side had their breakthrough inside 19 minutes, though - Antonio Candreva engineering room for a cross that Brozovic duly headed home.

Benevento were further behind three minutes later, Brozovic doubling his tally for the season with a sublime free-kick that nestled in the top-right corner.

Inter's lead looked to have been cut almost immediately, only for Pietro Iemmello's goal to be harshly disallowed for offside after Ledian Memushaj's strike had clattered the crossbar.

Mauro Icardi had the ball in the net on the half-hour mark, though again the goal was chalked off for offside, while D'Alessandro flashed a strike wide at the other end.

D'Alessandro did better prior to the interval, however, when he latched on to Iemmello's throughball to dispatch coolly past Samir Handanovic.

The Benevento winger was desperately unlucky not to restore parity after the restart, his close-range header rebounding back off the left-hand upright.

Brozovic nearly turned provider shortly after the hour, when his wicked cross picked out Ivan Perisic, who was unable to direct his header on target.

D'Alessandro continued to threaten for the hosts, while Icardi could have put a disappointing display behind him late on, only for Inter's skipper to skew his close-range effort over.