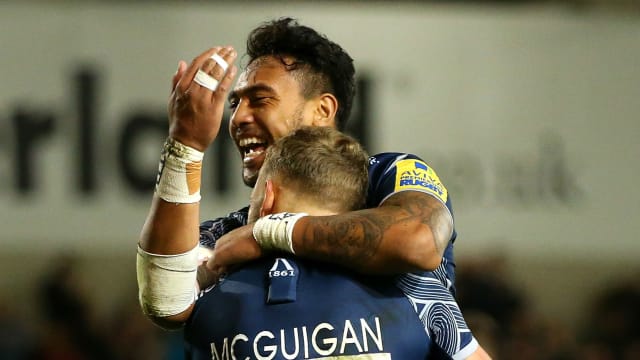 Sale Sharks and Saracens secured resounding victories on Friday but it was Newcastle Falcons who had the greatest reason to celebrate as they went top of the Premiership by defeating London Irish.

The Sharks ran in eight tries as they dismantled Gloucester 57-10 at the AJ Bell Stadium, Byron McGuigan scoring a hat-trick and England international Denny Solomona bagging a double - the first with just 50 seconds on the clock after chasing his own kick down the right.

Johan Ackermann's side trailed 22-3 at the interval and were not helped by a yellow card for Billy Twelvetrees for pulling back Tom Curry in the 47th minute, Sale using their extra man to cross three times.

The last of those came courtesy of debutant and former Australia international James O'Connor, with John Afoa getting a consolation try that did little to salvage any pride for the visitors.

It's a gr-eight night for the hosts with an emphatic victory!#SALvGLO#AvivaPrempic.twitter.com/dOWxmkwwUO

Alex Goode got Sarries' other try but they were left to rue their failure to secure a bonus point that means they trail Newcastle in the standings.

Where Saracens failed, the Falcons succeeded; Dean Richards' team moved clear at the top, temporarily at least, thanks to a 29-17 bonus-point victory over London Irish.

Vereniki Goneva crossed twice after Juan Pablo Socino scored the first try in a one-sided first half, with Will Welch making sure Newcastle ascended to the summit by a point.