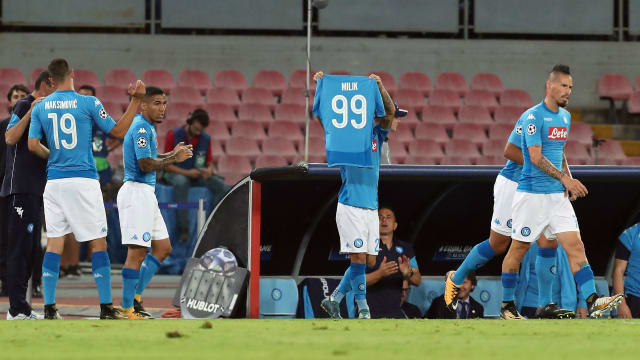 Arkadiusz Milik's Napoli team-mates dedicated goals to the injured star as they got off the mark in the Champions League with a comfortable 3-1 win over Feyenoord on Tuesday.

While Milik was not involved after suffering a cruel blow against SPAL in Serie A - his second ruptured cruciate ligament in a year - the Poland international was not far from hearts and minds in Naples.

Lorenzo Insigne's opener saw the goalscorer hunt down his team-mate's shirt and Dries Mertens, after scoring again at the start of the second half, looked to the camera to display an "M" in recognition of the forward.

Both sides had lost their opening matches in Group F, but Napoli's reverse at Shakhtar Donetsk had been rather tighter than Feyenoord's home humbling at the hands of Manchester City.

And there was again a gulf between the Dutch side and their opponents, even if the score-line still showed only Insigne's seventh-minute strike at half-time.

Mertens' 50th Napoli goal at the San Paolo soon came, though, and Jose Callejon added a third after Pepe Reina kept out a Jens Toornstra penalty at the other end, before a consolation for Feyenoord and Sofyan Amrabat arrived in stoppage time.

Mertens was back in the Napoli side after Sarri's brave - and costly - decision to rest his main man against Shakhtar, but it was Insigne who made the early impact, taking possession in the middle of the pitch and bursting forward to drive a fine effort into the bottom-left corner.

And Insigne, intending to show his support for the injured Milik, ran to the bench to initially celebrate with a shirt bearing Piotr Zielinski's name - courtesy of the midfielder - before correcting the error with a grin.

Feyenoord's response was laboured and, after a lull in play, they were fortunate not to fall two behind as Brad Jones took a heavy touch and scrambled to knock the ball away from the waiting Insigne.

Jones shakily intervened again with an untidy parry from Insigne's strike, but the goalkeeper was quickly back in action to make a far more convincing double-save from Mertens and Jorginho.

Marek Hamsik and Insigne each shot wide as Napoli ended the first half firmly on top.

The visitors held out for just four minutes of the second half before Mertens' goal arrived, though, with the forward given time and space to coolly slide a finish under Jones before again giving a nod to Milik.

50 - Dries Mertens has scored his 50th goal for Napoli at the San Paolo in all competitions. Home. #NapoliFeyenoord

Steven Berghuis and Karim El Ahmadi belatedly offered a response - both thumping hard and low at Reina - but Feyenoord initially found no way through the goalkeeper.

Reina brilliantly denied Toornstra from 12 yards after Berghuis had gone down under Faouzi Ghoulam's challenge, giving Callejon the platform to net the clinching third on the counter-attack two minutes later, sliding a finish across Jones.

The Napoli goalkeeper unbelievably saved once more when Tonny Vilhena inadvertently deflected Berghius' shot on target, but he could do little to stop Amrabat as he charged into the box and prodded into the net with the game's final action.