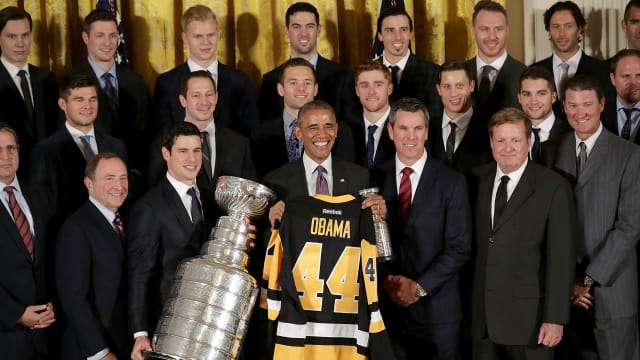 Trump sparked backlash after rescinding his invitation for the Warriors to visit the American capital, citing "hesitation" by two-time MVP Stephen Curry about whether Golden State should go.

Curry, head coach Steve Kerr and players from around the league, including Cleveland Cavaliers star LeBron James have been outspoken in their criticism of Trump, however, the Penguins still plan to make their way to the White House.

"The Pittsburgh Penguins respect the institution of the Office of the President, and the long tradition of championship teams visiting the White House," a statement from the Penguins read on Sunday.

The Pittsburgh Penguins have a statement regarding the team's upcoming White House visit.

"We attended White House ceremonies after previous championships - touring the historic building and visiting briefly with Presidents George H.W. Bush and Barack Obama - and have accepted an invitation to attend again this year.

"Any agreement or disagreement with a president's politics, policies or agenda can be expressed in other ways. However, we very much respect the rights of other individuals and groups to express themselves as they see fit."

Later on Sunday, Trump welcomed the Penguins' statement in a tweet, calling them a "Great team!"

Please to inform that the Champion Pittsburgh Penguins of the NHL will be joining me at the White House for Ceremony. Great team!