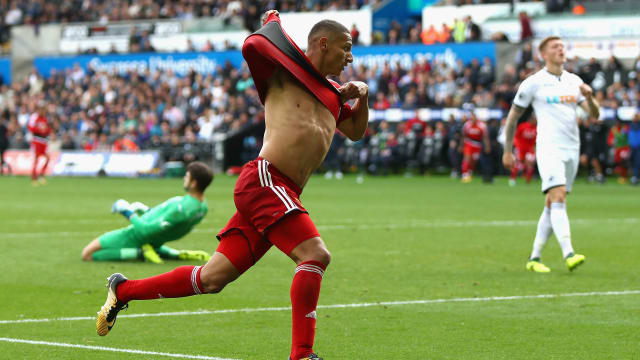 A late goal from Richarlison continued Watford's 100 per cent record away from home this season as they edged past Swansea 2-1 at the Liberty Stadium.

The Brazilian took advantage of a poor attempted tackle from Alfie Mawson in the 90th minute to break through and fire past Lukasz Fabianski.

Andre Gray had earlier given the Hornets the lead in the 13th minute with his first goal for the club before substitute Tammy Abraham equalised for the Swans 10 minutes into the second half.

Swansea will need to pick themselves up for the trip to West Ham next weekend, while Watford will look to build on their impressive start to the campaign when they visit West Brom.

Watford started with real purpose and created the first clear sight of goal inside the opening five minutes.

Kiko Femenia broke down the right and pulled the ball back towards the unmarked Gray, but the striker's goal-bound effort was deflected agonisingly past Fabianski's left post.

Gray did not have to wait long to break the deadlock, though.

Wilfried Bony's misplaced pass found its way out to Andre Carrillo, whose cross was deflected into the path of Gray, and the former Burnley man pounced to prod past Fabianski.

The goal appeared to spark Swansea into life and they almost levelled soon after, but Heurelho Gomes reacted quickly to smother Federico Fernandez as the defender tried to get his shot away from just a few yards out.

Watford thought they had their second shortly after the half-hour mark, but were denied by the linesman's flag.

Fabianksi could only parry Femenia's long-range shot back into the danger area, and Richarlison's ball back across the face of the goal was tapped in by Carrillo, but the Peruvian had strayed marginally into an offside position.

Gray could, and perhaps should, have scored his second five minutes before the break when he latched onto Alfie Mawson's poor back pass. His shot crept agonisingly wide of Fabianski's far post, though, from an acute angle.

Clement made a double substitution at the break, and one of the players introduced pulled Swansea level 10 minutes into the second period.

Bony's shot from just inside the area was only parried by Gomes into the path of Abraham, who had the simple task of slotting into an empty net from three yards out.

Just as the game looked to be petering out for a draw, Richarlison then took advantage of some sloppy play from Roque Mesa to power past Mawson's weak challenge and fire in off the bar to continue his side's fine away form.