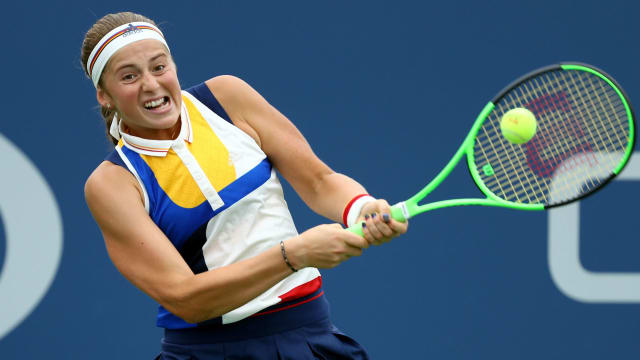 Jelena Ostapenko produced another commanding display to ease into the semi-finals of the Korea Open with a straight-sets victory over Veronica Cepede Royg on Friday.

The French Open champion has not dropped a set in Seoul this week and Cepede Royg was the latest player to feel the force of the 20-year-old, who won 6-3 6-1

Ostapenko will be up against qualifier Luksika Kumkhum in the last four after brushing aside Cepede Royg, breaking twice in each set.

The top seed moved into the top 10 in the world rankings for the first time this week and looks determined to celebrate by claiming only her second WTA singles title three months after the Latvian's sensational triumph at Roland Garros.

Ostapenko struck 23 winners in another powerful performance, ending the quarter-final in only 72 minutes.

Kumkhum advanced to the last four by beating fourth seed Sorana Cirstea 6-3 6-1 in just over an hour.

The Thai outsider lost the first three games of the match, but took control by reeling off 11 in a row to ease through.

Either Richel Hogenkamp or Beatriz Haddad Maia will play in the final after both made the semi-finals of a WTA event for the first time with wins over Priscilla Hon and Sara Sorribes Tormo respectively.