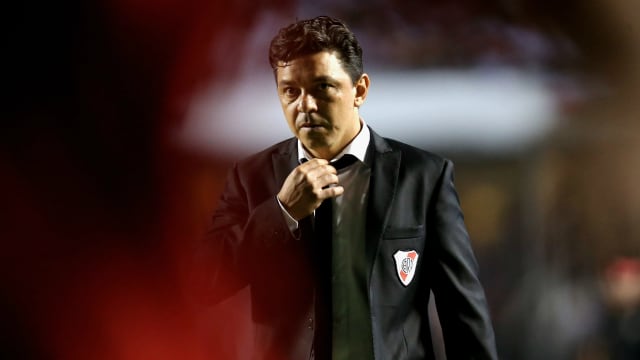 Ignacio Scocco inspired an incredible Copa Libertadores win for River Plate, while Lanus joined them in the semi-finals on Thursday.

Trailing their quarter-final against Wilstermann 3-0 after the first leg, River produced a spectacular display in the return clash in Buenos Aires.

Scocco scored five times and set up another in a resounding 8-0 victory at the Estadio Monumental Antonio Vespucio Liberti.

The 32-year-old former Sunderland and AEK Athens forward had a hat-trick inside 20 minutes - wiping out Wilstermann's advantage.

Scocco got on the end of a Leonardo Ponzio pass for the opener, drilled in the second before his inswinging cross from the left snuck in at the back post.

There was no stopping Marcelo Gallardo's River, or Scocco, and they took the lead in the tie before half-time.

Less than a minute into the second half, Scocco tapped in a Gonzalo Montiel pass to make it 5-0.

Ignacio Fernandez was the next man on the scoresheet, before Scocco scrambled in another after a corner to make it 7-0 inside an hour.

Perez completed the rout on the counter-attack, breaking clear before finishing River's eighth to seal an amazing win.

Awaiting River in the last four are Lanus, who completed a turnaround of their own to get past San Lorenzo.

Jose Sand and Nicolas Pasquini scored in the opening 16 minutes to see Lanus claim the second leg 2-0 at home - levelling the tie at 2-2.

Goalkeeper Esteban Andrada was the hero in the penalty shoot-out, making saves from Matias Caruzzo and Nicolas Blandi to send Lanus through 4-3 on spot-kicks.