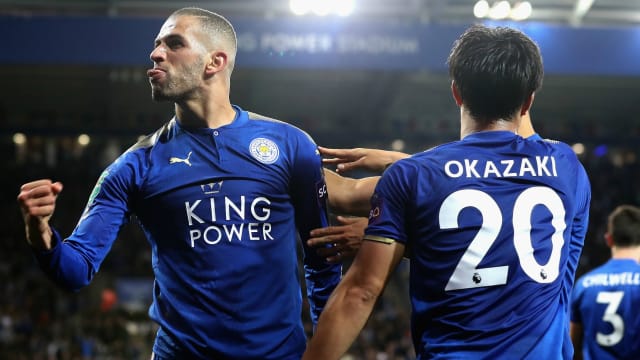 Liverpool's EFL Cup campaign came to an early end as second-half goals from Shinji Okazaki and Islam Slimani gave Leicester City a 2-0 win at the King Power Stadium on Tuesday.

Substitute Okazki - on in place of the injured Leonardo Ulloa - was in the right place to pick up a loose ball inside the penalty area to break the deadlock in the 65th minute.

Strike partner Slimani settled the third-round tie in style 13 minutes later, sending a left-footed drive flashing beyond goalkeeper Danny Ward to get his third goal in the competition this season.

The result means Liverpool - beaten finalists in 2016 - are still yet to record a win in September, a worrying four-game rut they will hope to stop on Saturday when the two teams meet again at the same venue in Premier League action.

Jurgen Klopp's side were impressive in the first half but, just as was the case in their 1-1 draw with Burnley at the weekend, struggled to turn their dominance into clear-cut opportunities.

Goals from @okazakiofficial and @slimaniislam send #lcfc into the fourth round of the Carabao Cup! #LeiLivpic.twitter.com/SUTHFkMGTT

The German made eight changes from Saturday, although Philippe Coutinho retained his place in a starting XI that included Alex Oxlade-Chamberlain for the first time.

The deadline-day signing from Arsenal looked set to mark his full debut with a goal for the visitors, only to see his effort deflected over the bar by a sliding Ben Chilwell.

Still, the early opportunity set the tone for a one-sided first half.

Andy Robertson's raids down the left caused constant problems, with one driven cross missed by both Dominic Solanke and Coutinho when the goal appeared to be at their mercy.

Goalkeeper Ben Hamer - one of seven changes for Leicester - was called into action to keep out low shots from Coutinho and Oxlade-Chamberlain.

While Solanke sent a lob onto the roof of the net, the home team mustered just one attempt at goal before the break - a feeble shot from Demarai Gray that dribbled straight to Ward.

Coutinho did not appear after the interval as he was replaced by teenager Ben Woodburn. Without the Brazilian pulling the strings, Liverpool struggled to find the same fluency in possession.

Although Leicester lost Ulloa in the opening minutes of the second half to a head injury, his replacement came up with the opening goal.

4 - Shinji Okazaki has netted 4 goals in his last 7 apps for Leicester (all comps), more than his previous 33 combined (3). Upturn.

Liverpool initially cleared a corner, only for the return ball into the box to drop kindly for Okazaki, who took a touch before getting away a shot that flicked off Robertson before reaching the net.

Danny Ings was sent on to try and grab an equaliser but Slimani put the game beyond Klopp's team, producing a thunderous drive to follow up his brace against Sheffield United in the last round.