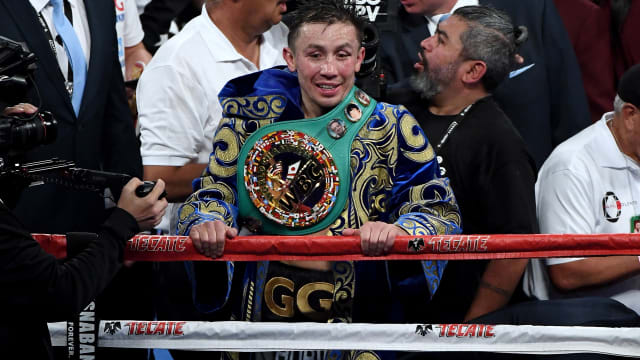 Gennady Golovkin would welcome a rematch with Saul 'Canelo' Alvarez after their brutal middleweight title fight ended in a controversial draw.

Golovkin defended his WBA, WBC, IBF and IBO middleweight titles in Las Vegas on Saturday, but a thrilling bout ended in a draw at T-Mobile Arena.

A rematch appears almost certain and Golovkin (37-0-1) said he was ready to face the Mexican - who was also open to a rematch - again.

"Of course I want a rematch," he said in an in-ring interview.

"I want a fight. Rematch or next fight, I want a true fight. I have my belts."

Will there be a #CaneloGGG 2 after a draw between two boxing Warriors? @HBOboxingpic.twitter.com/GjRC0k15Xq

Many felt Golovkin deserved victory after the 35-year-old dictated much of the fight, particularly through the middle rounds.

Golovkin said he wanted more from the bout as Canelo, who seemingly had the crowd on his side pre-fight, was booed afterwards.

"Today people give me a draw. My focus is on boxing. Look at my belts. I'm still champion, I didn't lose," Golovkin said.

"It's not my fault. I pressured every round. I want a big drama show, I want to give all people my big present. It's not my problem."