GGG v Canelo: Golovkin and Alvarez in their own words 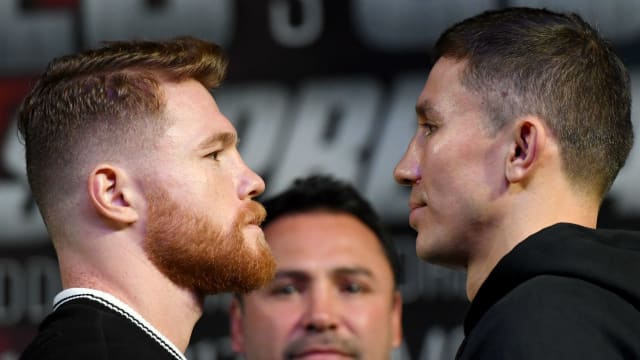 We've had Anthony Joshua v Wladimir Klitschko, we've had the polarising Floyd Mayweather Jr v Conor McGregor bout, but the fight of the year may well come on Saturday in Las Vegas.

Gennady Golovkin will face Saul 'Canelo' Alvarez in a highly anticipated matchup years in the making, between two of the best pound-for-pound fighters on the planet.

Golovkin is the favourite to triumph and successfully defend his WBA, WBC, IBF, and IBO titles.

But both GGG and Canelo spoke to Omnisport and here we look at what the two protagonists have been saying ahead of one of the biggest middleweight fights in recent history.

On what victory will mean for his legacy: "Huge. For my hard work. I think it will be a big bonus or a big present for my team.

How will this fight be remembered?: "I want like [Marvin] Hagler and [Sugar Ray] Leonard fight, like this. A history fight. The biggest fight maybe in the middleweight division, like that."

On closing in on Bernard Hopkins' record of 20 successful middleweight title defences: "I'm not thinking about Bernard's record. For me, I know my boxing career. That's more important."

Will Canelo be his toughest challenge?: "Absolutely. This is my biggest fight."

On his ability to adapt his style: "I'm a fighter who's a thinking fighter, who can make adjustments, who has a Plan A and more than that and on Saturday you're going to see it. We're going to show all those attributes, all that talent."

Will this go down as a classic?: "I'm hoping that this fight goes down in history as one of the greatest fights to ever materialise and I'm willing and I'm coming to give on my part everything so that it can be cemented as one of the greats."

On Golovkin: "We studied him and [have] seen several weaknesses. Saturday night we're going to go in and do our work to try to exploit them. And we're also ready for prepared for whatever he brings or anything else that he come with."

Predictions from the greats

Bernard Hopkins to Omnisport: "Canelo's gonna whoop his a**, he's gonna make this thing look different than you've never seen it before."

Mayweather, quoted by British media: "Do I think Triple G can beat Canelo? Absolutely not. I think there's a few guys that can beat Triple G, and Canelo is on the top of the list."

Leonard, quoted by British media: "I give the edge to GGG because of who he is and what he has. But I love Canelo, too. That's going to be a great fight. It's one of those where you just got to flip a coin."