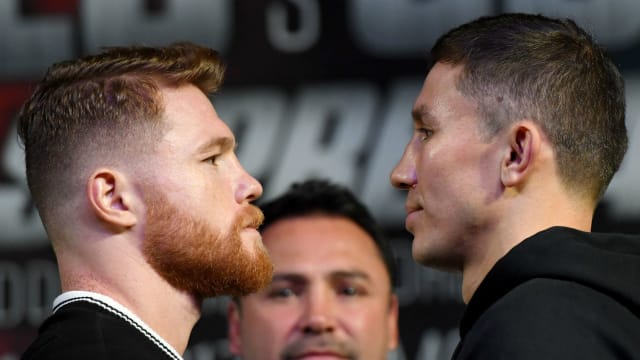 The circus left town last month with sacks of cash strapped to the wagons. Now it is time for the ring masters to take centre stage in Las Vegas.

After millions of pay-per-view punters, from connoisseurs to the morbidly curious, stumped up for Floyd Mayweather Jr v Conor McGregor, boxing purists at least had the consolation that no one unduly embarrassed themselves.

UFC superstar and boxing novice McGregor actually won a couple of the early rounds before pound-for-pound great Mayweather - having not sparred for a month to protect his brittle hands, or scarcely trained at all depending on which camp story you choose to believe - secured the knockout he promised to end a career packed with far more impressive deeds.

For Gennady Golovkin and Saul 'Canelo' Alvarez, the bar is set much higher than avoiding reputational damage. By agreeing to face one another in a long-anticipated middleweight battle, they have already avoided such a fate.

Reigning WBA, WBC and IBF champion Golovkin, the fearsome and undefeated knockout artist from Kazakhstan, makes the 19th defence of his reign against Alvarez, the flame-haired Mexican hero carrying the expectations of a proud fighting nation on his broad shoulders.

As is the case whenever a title fight around this weight class promises above-average entertainment, the names Marvin Hagler and Tommy Hearns have been recalled - their intoxicating clash in Sin City 32 years ago remaining boxing's gold standard when it comes to edge-of-the-seat, delirious drama.

The difference is, Golovkin and Alvarez's supreme careers to date and their fan-friendly styles that give every indication of meshing perfectly mean this bout is actually worthy of being mentioned in the same sentence.

Watch @Canelo and @GGGBoxing face off and talk to the media at the final press conference ahead of Saturday's fight. #CaneloGGGpic.twitter.com/aGpXkYK5h1

Throw around a few more luminaries, if you must - Carlos Monzon, Roberto Duran and the Sugar Rays Robinson and Leonard. This should be a weekend when boxing can bask in its illustrious past and not feel short-changed by the present.

That "the game's gone" sentiment is a seductive crutch for fans and observers even slightly long in the tooth. "Things aren't what they used to be" is as much a part of the sport as gloves, gumshields and spit buckets.

Naysayers have always been able to point to embarrassments and uncomfortable truths. Boxing has produced some of sport's most towering figures, but these were athletes who dazzled amid a complex tapestry of controversy, corruption and tragedy.

Mayweather v McGregor was never going to be boxing's death knell - the sport has looked silly before, albeit never for such handsome financial rewards - and Golovkin v Alvarez is not its ultimate salvation. Mismatches and bad decisions will not be obliterated by the crunch GGG's right hand or a withering Canelo left hook to the body.

The problem with the noble art's latest "crisis" is that 2017 has actually navigated the choppy waters of warring promoters, "protected" fighters and rival television networks well enough to provide the match-ups fans demand.

Leo Santa Cruz gained revenge over Carl Frampton to regain his WBA featherweight crown two weeks on from James DeGale and Badou Jack tussling to a thrilling draw in their super-middleweight unification. It was only January.

Anthony Joshua heralded a new heavyweight era with a triumph over adversity for the ages against the great Wladimir Klitschko before 90,000 people at Wembley in April, although American sensation Errol Spence left another Briton - Kell Brook - with a broken eye socket and similarly damaged pride as the visitor to a hometown stadium fight a month later.

Andre Ward cemented his claim to pound-for-pound supremacy by breaking Sergey Kovalev's heart and will over eight light-heavyweight rounds three months ago. Now Golovkin and Alvarez will legitimately challenge the Californian's claim to being the best fighter in the world today.

This run of superb main events underlines Mayweather v McGregor was only a necessity for the two cash-hungry protagonists; boxing is doing just fine for a sport perpetually in the doldrums.

On Saturday we will discover whether Golovkin can make light of the flaws on display in his past two outings and move on to 38 wins and 34 knockouts, or if Alvarez's evolution from prodigious youngster to counter-punching maestro coincides with getting a man eight years his senior at the right time. It will be an elite collision of high-skill, high-risk, high-tension and high-stakes where the watching world dare not blink.

A showdown that will potentially endure for decades, GGG v Canelo is not a fight to save boxing. But it is without question a fight to savour.